A Dysfunctional Family Finds Themselves “Stuck in Love” 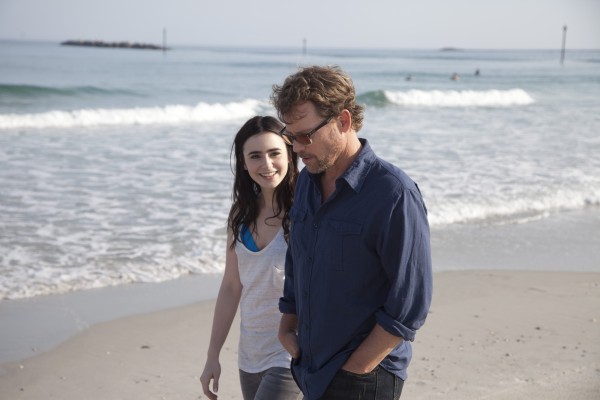 The many ways the trappings of love can snare us all are featured in this new romantic drama.  Greg Kinnear (Little Miss Sunshine) stars as novelist Bill Borgens, a divorced man unable to move on from the woman who left him (Jennifer Connelly – A Beautiful Mind), even as friends-with-benefits neighbor Tricia (Kristen Bell – Forgetting Sarah Marshall) tries to convince him to start dating again.  Bill must also keep an eye on his children.  Collegiate daughter Samantha (Lily Collins – The Blind Side) is finding success publishing her first novel while trying to avoid romantic entrapments, and son Rusty (Nat Wolff), who is struggling to express himself well to a classmate.  These separate stories all come together in a climax that makes them all rethink how love has brought them together and will keep them connected, no matter what happens.

Stuck in Love is the debut film for Josh Boone, both as writer and director.  It is a difficult task for any director to attempt to weave vignettes into one overarching, moving story.  However, this film being an official selection at the Toronto 2012 International Film Festival is good evidence that he has been successful.

Stuck in Love is rated “R”, and opens in theaters July 5.