“Avengers: Endgame” star, Robert Downey Jr. has dropped over 10 years into Tony Stark which started with just hoping to not drop the ball 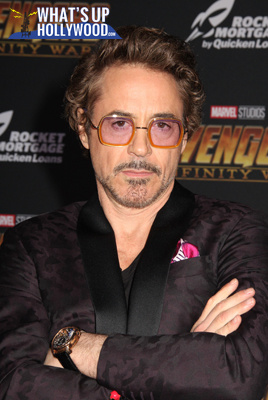 In May of 2008, Iron Man opened and fans were introduced to Robert Downey Jr’s Tony Stark. It was the beginning of one of the most successful film franchises in history with 22 successful films in the Marvel Cinematic Universe. Robert Downey Jr. also brought a new simmering cool vibe to a super hero while his alter ego Tony Stark brought life back to Downey’s career. We chat with the legendary actor on what it felt like suiting up as Iron Man the first time and how lighting and salad comprise his perfect body.

Q: Looking back to when you first suited up as Iron Man the first time, did you envision Tony Stark’s arc and where you wanted to see the character go? And how did you approach building such a memorable character?

I’ve been thinking about this recently. There is always two tracks at least in my mind. One is the sky is falling and the other is the sky is the limit. And as we had those many discussions in the high desert and shooting the film, I’m reminded now that I was talking a lot of smack saying wait until you see where this goes. But in the moment, I was just hoping day to day we were making good scenes and getting good stuff in the can. And the usual Gobbledy-Gook. I just wanted to not drop the ball. 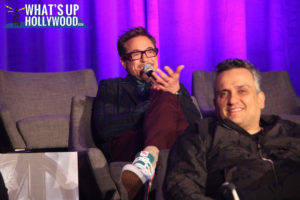 Q: Was it a surprise early on that Iron Man amassed an army of devoted fans and what do those fans mean to you today?

I’ve been just feeling like I’m kind of an oddball manny who I’ve been offered the opportunity to usher in this large [Inaudible] you’re seeing family and stuff. And I look around and we are close and growing closer by the moment.

Q: Just by a show of hands, who prefers bearded cap over clean shaven cap?

I’m going with neither. I like Chris Evans, I like Chris Evans with a beard with prosthesis over it when Joss Whedon asked him to come do the tag for the first Avengers. Go back and watch that tag. He had a beard. Yeah. He had a board he couldn’t shave. So they couldn’t… 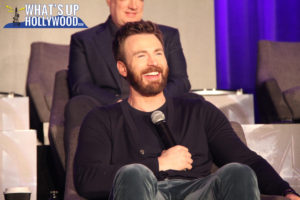 Chris Evans jumping in: This is the Schawarma scene, right? I was in the middle of shooting Snowpiercer. I couldn’t shave the beard. They were like oh, it’s okay. We’ll do prosthetics. I was like a billion bee stings. You know. I just thought why not? I mean, we’re making Mark Ruffalo green. We can’t just lose this. But we spent some hours in the chair and put prosthetics on it.

Q: Shooting that moment with Spiderman, having him turn to dust and the actual acting and the emotion of that moment. Just what it was like to shoot that scene specifically on that day. And do you have a particular person who turned to dust that was the most emotional for you to watch as an actor? 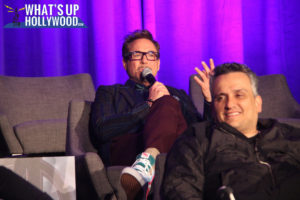 I think we were on a set for what seemed like four years. So that was Titan continuous? I just love the lighting in that scene. I look so shredded. I was more shredded than a Julienne salad, man. No. I don’t make… I make a lot of faces. I need some help in the editing. It was one of those moments. This is the most serious thing that’s happened since you were nine. Now don’t F this up. And I remember the brothers were there. I think we restaged it once or twice. Anyway. It was crazy to shoot it. But it was just another day. Then we were at lunch and doing this stuff. Because it’s a movie. But then I think seeing it and I happened to see it with this amazing kid, the Scottish kid who couldn’t go to a theater. I saw it with him and his reaction really F’ed me up. So I think what a lot of us are looking forward to is like Kevin (Feige, producer) always says is that it’s a surprising delight experience with Endgame. But it’s one of those things where you go wow, I think we just made a pretty serious choice here. But I think audiences liked that. I think audiences are so smart and now so, they require to not be fed the same drivel as even 20 minutes ago. It’s like we need novelty. And I think that what the Russos (Anthony Russo, Joe Russo, directors) and Kevin have been able to do that is provide that in spades.