Cage and Cusack in a Showdown on “The Frozen Ground” 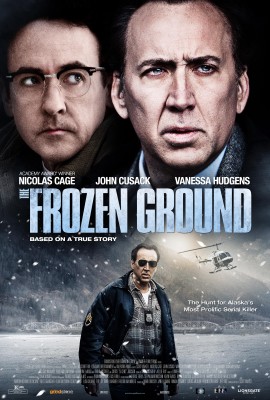 Nicholas Cage stars as Alaskan State Trooper Jack Halcombe in The Frozen Ground, a crime-suspense film based on the real-life hunt for a serial killer.  As the number of grisly murders of young women increases, pressure mounts on local law enforcement to solve the case.  When the lone survivor of these attacks (Vanessa Hudgens – High School Musical, Spring Breakers) accuses prominent local citizen Robert Hansen (John Cusack) of being the perpetrator, prejudice and disbelief lead to his acquittal.  But when she turns up missing, the race is on to save her and bring Hansen to justice.

The natural beauty of the Alaskan wild contrasts well here with the dark nature of the crime, and the trailer itself has a dark, muted tone which contributes to a sense of dread.  Cage’s performance seems surprisingly reigned in, particularly compared to his recent outings, and Cusack playing a serial killer is a nice choice to go against type, while still being a convincing “he could never do THAT” kind of character.  Hudgens continues to extend her acting chops, and does a convincing job of conveying the terror that comes with the situation.

The Frozen Ground is rated R and opens in theaters August 23rd.