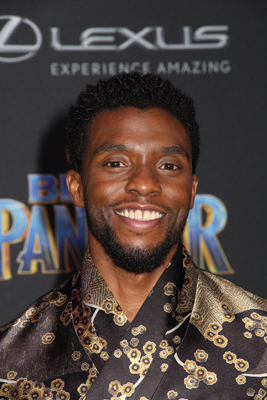 Even though he has played legendary men like Jackie Robinson in 42 and James Brown in Get On Up, Chadwick Boseman has remained very humble and unassuming. So when he got an offer for the title role of Black Panther, he was so unassuming that he almost missed the call because he didn’t have an international calling plan on his cell while doing the press tour for another film. 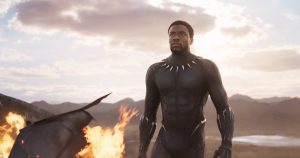 Q: Did you know Black Panther would be a stand-alone movie?

essentially said, “We want to bring your character into the Marvel Comic Universe – as a stand-alone, but this is the best way to introduce him in Captain America: Civil War.”  So I was aware of it.  And I think when I was shooting Captain America: Civil War, I was not aware that other people weren’t aware that this was going to happen, because it was so – such at the forefront of my mind, you know, and when we did the introduction at El Capitan.  So – I’m sorry that you didn’t know that.  [Laughs]  But at the same time, I love the fact that it’s a surprise to people. 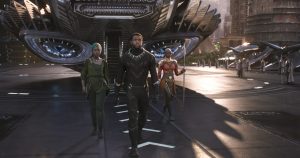 Q: Do you remember when you received phone call from Kevin Feige?

I was in Zurich.  And I was coming off of the red carpet for Get On Up.  And my agent was like, “You’ve got to get on the phone.”  And the crazy thing is I didn’t even have international calling on my phone [Laughs] until that morning – and I heard, literally we heard somebody say, “Hey, get international on your phone.  Call your mom.” [Laughs]  It’s some important stuff, literally, that happened, and then that night he called.

Q: What do you think the relationship of your character T’Challa and his younger sister Shuri, played by Latitia Wright?

My older siblings, they raised me.  And so to a certain degree when I say, you know, I allow her – I don’t mean it like – I’m meaning it like, you see the genius that is inside the people that come after you.  And if you have an ancestor around, they’re looking at you like, “I know you’re looking up to me, but we’re looking up to you.” That is an African concept. 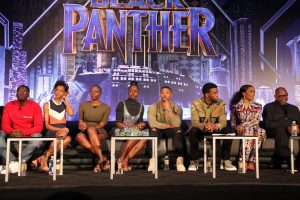 Q: Could you talk about African accent for your character?

You know I think as actors this is separate from the movie, but there is, when you’re trained very often from a European perspective. What is considered great or classical is very often British and it’s certain writers and I happen to come from a background that does not believe that, you know.  I went to Oxford to study, but I went to Howard (University in Washington D.C.) and we [Laughs] were taught to respect our writers and our classics just as much and believe that it takes the same skill level and same technique and sometimes techniques 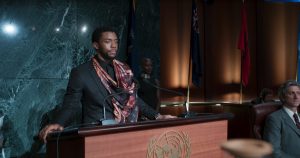 that are a little bit different to pull that off.  And so I think you have to be, you have to tell the stories and be true to yourself as an artist.  And in this there’s no reason, you know, for it because there was a time period where people were asking me questions about whether or not an audience could sit through a movie with a lead character who spoke with that accent. And it was not Kevin by the way, so just making sure you know that. [Laughs] People outside Marvel as well and so I became adamant about the fact that that is not true. That the intonations and melodies inside an African accent are just as classical as a British one or a European one and that all of the emotions and aspects of a character can be shown and expressions can be shown through that accent and we have to take this opportunity to show that and he just wouldn’t, if he had never been conquered, if his ancestors had never been conquered and he’s never been conquered and Wakanda is what it is, he doesn’t have to go to Oxford to study.  He doesn’t have to go to Cambridge or Yale or any place to study. He actually got his education at home and he would not then assimilate a language that is the colonizer’s language in order to speak to his people. So he had to speak with an African accent.