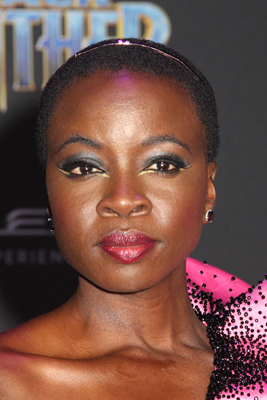 What I really liked about Black Panther  is this is not just another male super hero story, quite the contrary. This super hero actually has a posse of super women at his side, starting with Okoye, the top warrior in Wakanda, played by Danai Gurira.

Danai shares what it took behind the scenes to become a warrior and why Black Panther will be epic. 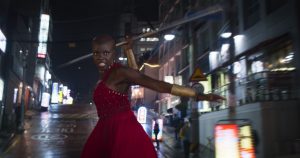 Q: These were fully developed women in this movie. Could you talk about behind the story for the development?

When Ryan (Coogler, director, writer) sat me down and talked to me about his vision, and the story, and the characters, and the women, I was just floored, you know, because you don’t actually get to hear that often. You don’t actually get sat down and hear that type of a vision. And then it embodied with us being on the continent, women from the continent, but very developed, very complex. It was amazing. I mean, it was just like, this is going to – like, this is something else – like, I just want to watch it. I get to be in it?  And then these astounding women who I started training with. 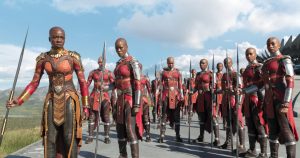 And you know, one by one – like, I was the first one to get my head shaved, and in theory, it sounded amazing, you know.  And then the day came I saw them and I was like, “Was it today?”  I had like, “it happened.”  And then like I walk in, you go into the restroom to wash your hands, and you look up, you go, “And what the….” You know. [Laughs]  And it took a few days. And then all the girls started coming in – like, we’d all been balded, one by one.  You know, and it was just like everybody got their caps on.  And then we just – and then the pride started to grow. This pride around it, and this sort of embracing of this – this sort of symbol of power in these women.  And then beauty of how he wrote that moment – I loved that moment where she like, doesn’t want a wig. She doesn’t want to cover up. This is her joy, and her pride, is in walking in with that – with that bald head with that tattoo on it. You know.  And I was like – who – and that was like, it was so subversive, you know, and it’s so subversive in the right way, to say – we – that’s not – be – that’s necessarily beauty.  You don’t have to have hair to be beautiful. There’s so many great things I could say about how Ryan developed these women characters, and allowed us to collaborate – that I’m just – I feel really blessed about, and excited.

Q: What your thoughts of Wakanda in the film?

I think what was really fascinating and like almost very emotional for me being that I’m Zimbabwean and being that, you know, that’s something that you always kind of want, you see the power and the potential of where you’re from, but you see how skewed it’s viewed by the world and how misrepresented it is and how distorted it is or received by the world so often. So to see, this is kind of the answer to all my – it’s kind of a salve to those wounds to see this world brought to life this way and to see all the potential and power of all of the different African culturalisms and aspects of our being that was celebrated and it’s so different. It’s a birth of things that we’ve been seeing forever around the continent that we see when we’re there. We see beauty, we see power, we see potential, we see ability, we see resources, but they are never exhibited and then to put it on sort of a Marvel epic scale of exhibition it’s like, it really salves wounds in a really deep way.