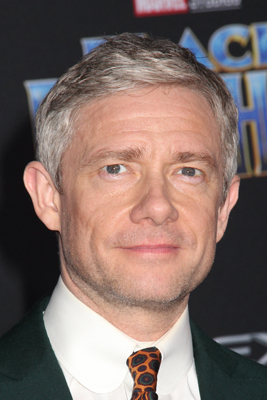 Best known as Bilbo in The Hobbit or Dr. Watson in Sherlock, English actor, Martin Freeman took on the role of a CIA Agent, Everett K Ross in 2016’s Captain America: Civil War and showed fans a new side.  Now he returns to his Marvel alter ego, Agent Ross in the new Marvel blockbuster, Black Panther. While some have labeled Agent Ross an alley of Black Panther, others have pinned him as the white super hero of the movie. 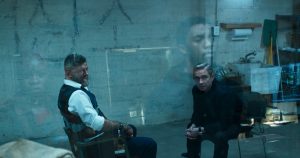 Q: Can you talk about the experience of being Agent Ross?

it needs to be a little bit more 3D than that and I was very pleased when I was reading, you know, bits of the script and then new bits of the script that were coming in. They were making it more emphatic and a bit more can do, because clearly it’s not Agent Ross’s film by a long way, but he plays his part, and there is sort of an ambivalence about Ross I think, you know, ‘cause you’re not quite sure if he’s gonna be down with T’Challa or not, but he ends up with, well he ends up having his eyes opened by this country that he knew nothing about and a civilization that he knew nothing about and realizing that it had something to offer and that he went away learning a bit from it. So I was very pleased that Ross had his kind of moment of heroism at the end. He gets in his plane and he gets to help out. He has his little Hans Solo moment. So I was really pleased and I thought that was generous on the film’s part and I thought it was, ‘cause we’re not short of white heroes in movies, so I thought to make one of the two white characters, a bit of a hero I thought spoke very well of them actually.