“Chappaquiddick” star Jason Clarke keeps his judgments to himself 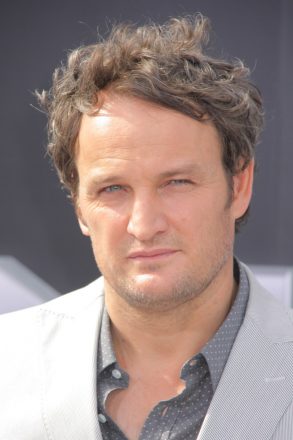 Australian actor, Jason Clarke has often played antagonist characters even though he grew up in a country known for alkalizing conflict. In his new film Chappaquiddick, Clarke takes on the role of not just an American politician, but one from one of the most famous families in American politics, the Kennedy’s.  We chat with the Aussie native on how he nailed the role of Ted Kennedy, who ironically he has actually met.

Q: Do you think you would have liked him if you hung out with him?

Of course I would have, yeah. I mean I’m sure he was a fascinating man. You know I met him very quickly at a boat race years ago, in Hyannis Port (Massachusetts). I mean, he’s Ted Kennedy. That family has bestrode the earth. His father was U.S. ambassador in World War II. He negotiated with the Nazis to get Jews out of Europe. I mean, he’s been there. There’s so many fascinating things about this family, about what they’ve done and the world that Ted’s seen. 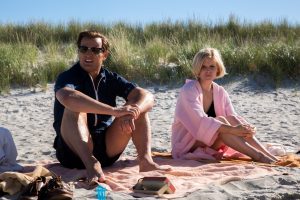 Q: How did you meet him?

I was shooting a series called Brotherhood for Showtime and I was playing a politician. I was playing a Democratic politician, and Catholic. Then the locals over there are very friendly. Very welcoming, small, tight community. They said there’s a big, I think it was the Figawi boat race kicks off the season. It’s a fun race where everyone’s drinking and sailing and the object is just not to win it but to have fun. Ted, he sailed and he still does. He’s loved the ocean his whole life. Somebody said, “Senator Ted Kennedy’s over there if you’d like to meet him.” I said, “Well yeah, I’d love to.” For a little boy from Australia playing a politician, that’s a handshake I’ll make sure that I’m switched on when I make it. So yeah, I’d known as much as I could about the Kennedys but the more you go down, there’s so much to read and understand about them. It’s a pity that they’re so polarizing. 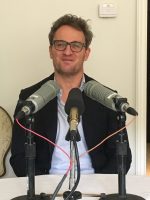 Q: Ted’s relationship with his father is very intriguing. Do you have a father figure who gave you advice or words that stick in with you today as an anchor for you?

Yeah, your family’s always your anchor. My family’s still my anchor. I come from a very loving family. Catholic, I guess which is similar to Ted. My parents are still alive, still married. The children are all close. My father was a hard-working sheep shearer. I come from a very working class family. Those things are instilled in me forever, I guess. I’m always worried where the next job’s going to come. That has negative impacts as well, in terms of I constantly have to be worried about the roof over my head. Ted, his world was, you thought about what things are similar. I guess there aren’t any. I mean he was baptized in the Vatican by the Pope. 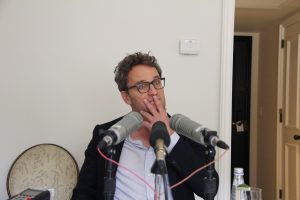 His brother was President of the United States and was shot. He was campaigning at another hotel when his other brother was shot dead in front of the whole world. It’s a very strange existence Ted has. I think that played a big part in why he walked away from the car and didn’t report it. I mean, any politician, I remember there was this very famous Australian politician, John Bjelke-Peterson. I mean, it’s probably easy to say just don’t say anything. Don’t write what you can say, than say what you can infer, and don’t infer what you think or what does need to be said. Ted just didn’t do anything. That’s what he did to begin with. That was his thing and I guess that’s a natural pull for most politicians. Just ride it out and see what happens. Eventually people come in and take care of it and all that, to say people have people that do stuff and things are moving around, and voila, he came out of the sausage machine and still had a job after having to deliver to the whole nation a speech. 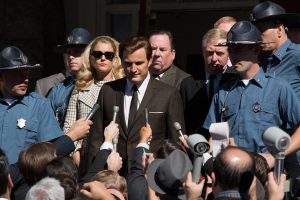 Q: You didn’t do a complete, Gary Oldman-type (for Darkest Hour) transformation. But was there some discussion about makeup or prosthetics, or were you always just going to go with the face you have?

It was, but I had teeth in. I had little plumpers down there and I had a wig. It was a very deliberate choice not to go for prosthetics. This story resides on an emotional level and then I think on a moral, intellectual level. So you had to accept very quickly, I think, that this man is Ted Kennedy. Or this man is a man going through this who happens to be Ted Kennedy. 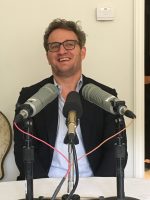 John and I did not want somebody to go, “There’s Jason Clarke in prosthetics.” We wanted enough to go … when you saw the smile, my teeth are not like Ted’s. I don’t have that bigger teeth and smile. They’re small and crooked. So months of prosthetic work to get the teeth to fit in so that A, my mouth wouldn’t have a lisp or it wouldn’t hurt. They did clip in. But also to get the size right. Initially we made them too big for my jaws so it looked like I had, you know… It was a delicate process of, John said, “What about contacts?” I said, “No, I think that’s a line too far. I want my eyes.” At the end, you want to be able to bring the audience in to me, to Ted, just to feel that you can go on this journey with me. Come up for air in the middle of the night and go, “I’m alive. Hang on, there’s somebody else in the car.” And then what would you do? Then Ted makes a million and one decisions here. He really does. And in the end, he takes responsibility for them. He owns them.

Q: Can you talk about the physical transformation and nailing the accent?

I like to look at pictures. I’ll have a couple of pictures of somebody in a pose. Like for Everest it was Rob Hall and the way he limped on a rock with one leg up. You just sit in that, and for Ted it was a couple of things on the phone. A lot of great pictures of Ted working the phones at certain angles. And there was a great sailing video that we got our hands on of him and his main buddy, Joe Gargan sailing on the Victura. Just some of the poses on the rudder. He would have sat in that way for a long time and when he’s on the rudder, that’s the happiest he is, you know. The way I hold the phone and that phone call, there’s a couple of pictures around of Ted doing it the same way. The hands in the same way on the same side, and his eyes, certain things. I’ll try and just put that in just for posterity and my own joke, or my own thing about it. Hopefully that picks up. I take the back brace off. I’m physical but I’m not in super shape. Ted, he wants to be an athlete but he’s not an athlete. There’s a photo of him carrying the ball up, big and burly but kind of not quite, ’cause he’s also at that point there were a lot of stories about his drinking and he looked like he had not a death wish, but a destructive wish. This flight back from Alaska and all that. So little things like that to bring the physicality into it so that you can see it. 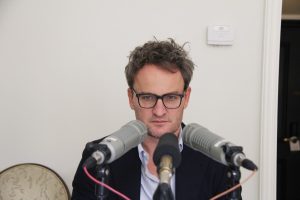 Then accent wise was just I mean months of just drills and working with a dialect coach, so specific. Then to put the teeth in, because I couldn’t dentalize my T’s for a long time. Then there’s a lot of speeches. I listened to one of Bobby’s speeches. So many great speeches. Jack’s speeches. The eulogy. I mean that eulogy at Bobby’s funeral is heartbreaking, still.

Q: As an actor, do you try to keep your personal opinions about your character separate or does that help you in how you mold yourself to the character?

I’m always trained and I always believe that I’m not going to judge my character or there’s no point in doing it. I think there’s a point to playing these people and the audience should see them, but judgment is silly. I have to play it. I have to be it. If I’m not going to go with me, why is anybody else going to go with me? Then that becomes the film which tells a story, which is usually and hopefully bigger than just one person.