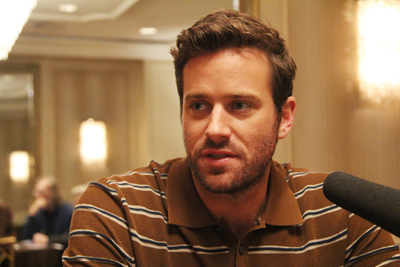 In the film, Armie Hammer plays James Lord, and American writer and art-lover who sits for famous artist Alberto Giacometti (played by Geoffrey Rush). While the request starts off as not taking more than a couple of days, it extends much longer than he expected; nineteen days to be exact. Hammer’s Lord bounces between patience, respect, and friendship, to uncertainty and bewilderment all while staying enamored with Giacometti.

Hammer shares the experience of his friendship on and off the screen with Rush and his character was not only on screen friendship they made but also off screen, they spent time together a lot! 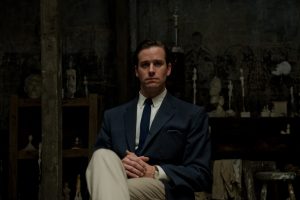 Q: From your research, what was it that motivated him to just stick it out? Was he just so enamoured with this painter that he wanted to do this?

This is something I learned in the process of making this film. It’s a huge honor when an artist of his reputation, and fame, and notoriety of Giacometti (Alberto Giacometti, sculptor, played by Geoffrey Rush), asks to paint you. 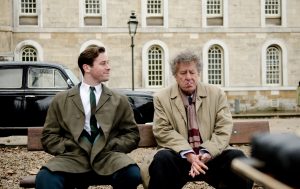 Because it is a huge time commitment for the artist. And they don’t paint people that they’re not interested by. There are people all the time, whether it be royalty or socialites or whatever, who want to be painted, or wanted to be painted at the time by these artists. And this goes back. Artists had muses, and it was people that they said, “I think you are so interesting that I want to spend this much time just staring at you.” And if they don’t think that you are interesting or worthy to be painted, they won’t paint you. So the fact that Giacometti even said I want to paint you is a huge honor. 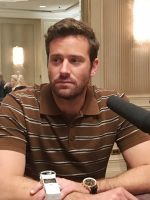 Q: What is the decision making process for you to pursue acting, and how long did it take for you to get a job? 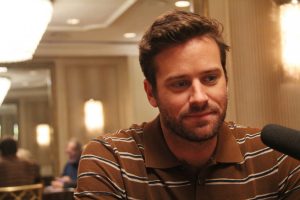 You just don’t have the technical know how. So for me the decision was always, I just want to be in movies. I want to make movies. But I didn’t really get into it until I was old enough, and then I dropped out of high school and sort of got into every single acting class or conservatory that would have me, and spent years doing that. From when I decided to devote my life to being an actor, to when I really had any success. Apart from, I did little TV jobs and all that stuff. I did several episodes on a TV show called Reaper. I did some episodes of Gossip Girl. I worked but it wasn’t what I wanted to do. It was mostly television and television melodramas and stuff like that. Which is great, there are a lot of people who love doing that. But for me, I just wanted to be in film. And Social Network was really the first big thing for me. And it was probably seven years of grinding it out and trying to break my way into it. 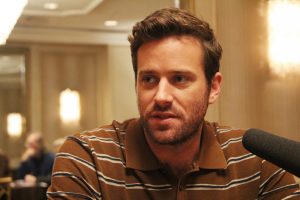 Q: So when you left school that was must have been very much to your parent’s dismay since they didn’t want you to do it in the first place.

Yeah, basically. They weren’t thrilled. In a way, I don’t blame them. If my children were like, “I want to be an actor,” I know what it’s like to kind of start out in the business. And how many times you get rejected and how many times people say no right to your face because they don’t care about you. It’s a weird business, it’s tough. And you see things that children should never see, and you experience rejection and you suffer defeats that children don’t have the social skills and the tools to cope with and deal with. So it’s tough, and I think that’s why a lot of people don’t last in the business. But at the end of the day, if you find a job that you love, you never have to work another day in your life.

Q: But you did it. It did happen for you.

Yeah I think it’s like that great quote. The harder I work the luckier I get. 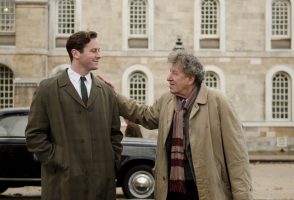 Q: How was working with Geoffrey Rush?

Geoffrey has an amazing talent. And it made my job really easy because James Lords’ (Armie’s character) purpose of sitting for this portrait was to just watch and become intimately involved with Giacometti’s artistic process. So playing a character who just sat and watched, I was given the privilege and honor of just sitting and watching Geoffrey Rush do his thing. He’s the hardest working actor I have ever worked with in my life. We would shoot all day, and at the end of the day I’d get home, and I’d be exhausted. And my phone would ring, and I’d pick it up. And I’d go, “Hello?” And he’d go, “Armie, it’s Geoffrey. What are you doing?” 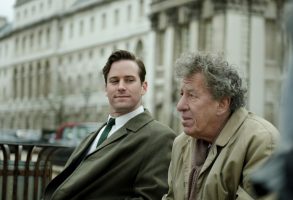 “I just got home, take a shower, have a beer, go to bed.” “Why don’t you come over and we’ll talk about the scenes for tomorrow.” And you want to say, “No man, I really just want to go to bed.” But Geoffrey Rush has just called you and said, “Do you want to rehearse.” And you go, “You know what, I love it. Let’s do it.” So you go to his place, and you work for several hours going over every single line, every single thing that happens in the scenes. And then go, “Geoffrey, we’re getting picked up in six hours man. Can we sleep a little bit?” And he’s like, “Yeah.” And then you do that everyday. Well not everyday, but we’d do that a lot. And then on the weekends. 9 a.m. on Saturday, my phone would ring. “Armie, it’s Geoffrey. What are you doing today?” It’s like, “It’s Saturday, I’m not doing anything. I’m relaxing.” “Why don’t you come by my place?” And you go, “Okay.” And you show up, and you’d sit there for seven or eight hours where he would go over everything and it was amazing to see someone who is of that level talent still putting that much work and effort into it. And it’s really refreshing. 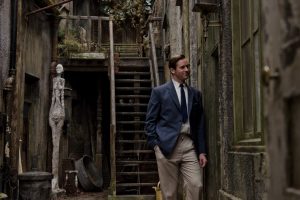 Q: You mentioned that you like to see movies as much as possible, so what was the last movie you saw with your kids? Also what films do you want to share with your kids when they get a little older?

The last movie I watched with my kids was Coco. We watched that two nights ago. But I am excited about giving my kids a film education. When they get old enough, and they can appreciate and sit through film, I got tons of shit I want to show them. 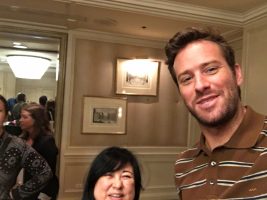 He is TOO tall for selfies!

Like that kid in high school who knew about Led Zeppelin before everyone else did, I think that my kids will know a lot about film. Just because my osmosis, my love of film will hopefully translate.