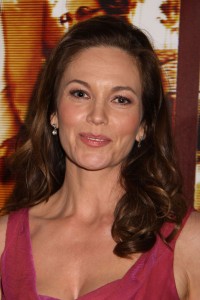 Hollywood beauty Diane Lane has established her status in the industry but it seems she has some roles left over which she has not crossed off her bucket list yet. A big fan of Jay Roach, the director of Trumbo, Diane confessed how desperate she was for the role. Also, she talked about the Hollywood 10 and the fashion of the time period. 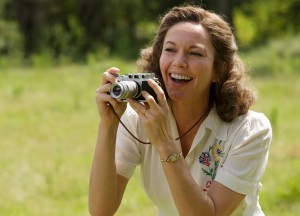 Q: Growing up in the industry, did you know about the blacklist?

I’d heard of the Hollywood 10. I didn’t really know what that was. I knew it was tied to the blacklist. I didn’t realize that they were all writers, primarily. I knew Dalton Trumbo’s name, but I didn’t realize he had written and had not gotten credit for his writing for two of his films. I didn’t realize he wrote Roman Holiday. I did know he wrote The Brave One, but I didn’t know the story behind it. It takes a while to rectify history because you have to have people who are passionate enough to do it. When you see the healing of the wounds that come from rectifying history, and telling the story of the victims and not just the way history is portrayed by time marching forward and the version of America that the media wants to present to itself on a conveyer belt, it just feeds itself. It’s a self-feeding machine. We need to bump up against it occasionally and get it off course to remind ourselves that we have to look at what we’ve done so we don’t repeat it. 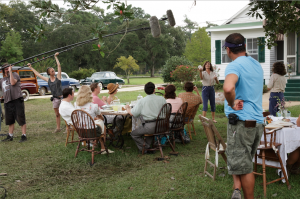 Q: What was your first impression when you got the script?

I’ve been a tremendous Jay Roach (director) fan. I’ve loved all of the movies of his. I was actually hoping that if I didn’t get the part, that maybe he’d see that I could be funny on purpose, and hire me in a comedy in the future. But I really wanted to work with Bryan Cranston too. I’d just seen him in the previews of his wonderful performance that won him the Tony in New York — the L.B.J. play, All the Way. The way it worked out was tremendous, because when we got to the set — skipping ahead — it seemed to me, Bryan, that he still had all of that locomotive. The wheels were (going). He was still oscillating, like this giant train. He hadn’t slowed down. He just kept barreling. Who needs tracks? We’re going to take it over here and do this with all of that wonderful mojo energy of the stage. So I was like, “Wow, we’re on 11 on this dial! OK!” But I came into the office to meet for the job. I’d already taken a juggling lesson to impress upon (Jay) the seriousness of my commitment. And also, realizing that God help me if I got the part, because I need every single moment possible to prepare for that particular scene, so that’s my story. 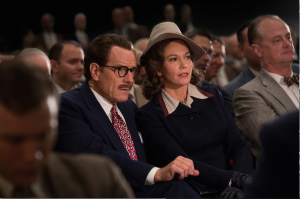 Q: What was it like dressing in the fashion of the time period?

It’s like being a transvestite to be a woman because you get to just dial up how much is required or how much you feel. And if you don’t want to play, you just put your hair back, don’t wear makeup, and schlump off to the grocery store and say, “I’m a dude today.” I just didn’t want to invest in being a woman because it takes work… It takes a village, honestly, to achieve the looks we have. Daniel Orlandi (costume designer) is amazingly gifted as a costumer. It was great fun to have his inspiration and excitement about it all. He’s worked on many films with you, right? [asking Jay Roach] So you guys are the right team, you trusted the right guy. So anyway, it’s really fun to play different eras. I love the looks of women as we go back in time, but I don’t love the politics that women had to endure as we go back in time. The foundations were very uncomfortable, but they looked great!