Exclusive: “Bleed for This” star, Aaron Eckhart shares what’s ahead for him and why Miles Teller is “A force out there to be reckoned with” 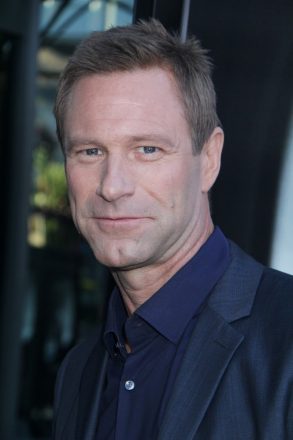 Aaron Eckhart  is every film producers dream because off screen no matter the size of the project or the number of media in attendance, Eckhart shows up and  does all he can to sell a film. I have personally have seen him at almost every single press junket and premiere set for every film he is involved with. Eckhart seem to have an organic respect for the process and as he becomes more seasoned as an actor and his popularity grows he never seems to faulter from his off screen dedication and this is why he is one of my favorite talents to interview.

Now, Aaron Eckhart has reached a whole new depth as an actor, starting with his role in Sully and now Bleed for This, and still here he is. This time I sit one on one with Mr. Eckhart and we chat about his career, what he sees in his future, and the two things everyone wants to know; how he felt seeing himself bald and what he spent his big paycheck on. 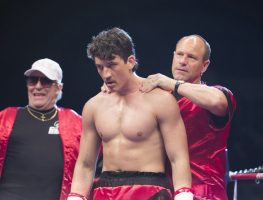 Q: Ok, you have hair now! How was it looking ahead 30 years and seeing yourself a little shiny up top and what was the process of giving you that look?

We shaved it then we raised it every day, then they put makeup on it. That was an interesting day. That was totally full commitment at that point that day. I kind of got used to my look after that. It’s funny because, whenever I look at the poster I see some of the movie and I say, “Okay if it happens it happens, I deal with it.” I got used to it a little bit. I didn’t die since I had no hair.

Q: What is your take on Kevin Rooney whom you played in the film?

This movie is about dreams. It’s about saying yes to yourself at the peril of your life. (It’s about) saying no to everyone else around you because you believe in yourself. Vinny (Paz, played Miles Teller) breaks his neck and says I’m going to be champion of the world. Kevin says that to himself too. Kevin trained with Cus D’Amato (Boxing Manager). Cus D’Amato asked Kevin to be Tyson’s (Mike, boxer) trainer. He sort of gives up his dream to become a fighter, and then Tyson fired him. That’s when Vinny meets Kevin. He was in great shape and the top of his class and now he has to train somebody. Once he trains them and they’re at the top, he gets let go. So Kevin had to rearrange his dreams. He had to live vicariously through other people. That’s why he drives Vinny so hard in the beginning. He has to retrain him. He has to be able to say, “I’m going to put everything inside of you, so it has to be worth it.” 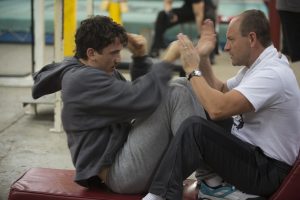 Q: How proud do you feel having done Miles’s first movie with him?

I could be his father. It’s interesting to see his evolution; to see this kid come out of NYU (and) work with Nicole (Kidman, plays Becca in Rabbit Hole), that material and I. When he did Rabbit Hole, my agent became his agent. I’ve sort of been able to keep track of Miles through my agent. He’s knocked it out of the park. He chooses his material well. He’s got a very good idea of who he is as an actor and where he wants to go. You’re watching a kid who’s green in the greenest way, now becoming commanding of his life and career. I’m proud of him in that sense.

I don’t have anything to do with it, so I don’t have that paternal side, but I feel competitive with him. The most important thing is that he’s a really good actor. For him to come in and to support him, to watch him get into his work, and as supporting actors we help define the protagonist. He takes it to the limit and inspires everybody to be better at their jobs. He’s a force out there to be reckoned with. 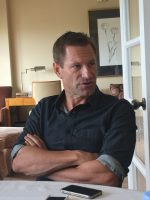 Q: I feel you are very seasoned as actor. How do you see yourself as an actor at this point in your career?

That’s an interesting question. I’ve been doing this for 20 years professionally and when you come in, you have your heroes that you want to emulate and be like. You make a lot of mistakes. You make good moves, you make bad moves but you learn. I’ve learned a lot in the last 20 years. I’ve learned how to behave from other actors. I think my path now is in directing. I feel like as an actor you’re saying other people’s words and their ideas. I feel like I have something inside me I want to say personally; my particular view of the world. That’s what I’m pursuing now. I spent this whole year writing, and hopefully I get to direct a movie soon enough.

Q: What did you do with the largest salary you’ve earned?

I think every sport star or actor does is they pay back their parents, or make it easier on their family. I’ve done the same thing. My parents put me through life, and they’ve been good to me, so I’ve been good to them. That’s one thing that I’ve done. I’ve also gotten myself some stuff. I got some cars and houses; fun things like that. I have a ranch I bought myself in Montana. That’s what I like doing the most. I bought that for my family and myself. I’m single, so basically I have nothing in my life. Any money that I earn… I give money away too. Money is crazy.

Bleed for This is currently playing in theaters nationwide.