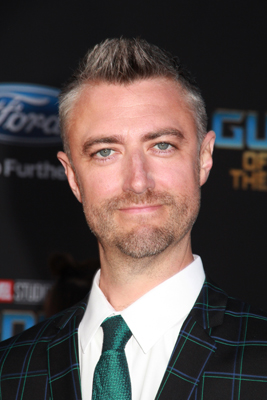 So I have a confession, my favorite character in the Guardians of the Galaxy series is Rocket! I like his attitude and I want to cuddle him! (but I am sure he will punch me). Sean Gunn plays Rocket (voiceover by Bradley Cooper) and although I don’t cuddle with Sean, I did sit down with him one on one to chat about his furry alter ego and what’s next for the young Gunn. 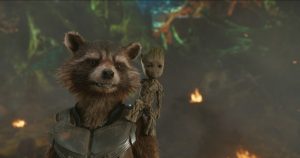 Q: Your brother, James Gunn wrote and directed the first Guardians of the Galaxy film. Did you have to audition for that role or get to pull the brother card?

I didn’t have to do audition. But I did have to go through the vetting process by Disney and Marvel. I knew that he was hoping to get me in the first movie but I didn’t know for sure. He called me and told me kind of like, “Yeah I am pretty sure I have this part for you that’s a small role. We kind of have to wait and see. Also, I may ask you to help out with the CGI characters.” But I didn’t know much about any of it until a week before I had to go to London for the first movie when he finally called and said “you’re in.” And he said “You are going to do this character Kraglin who is the first maid of Yondu but also I’m going to ask you to be the actor that helps play Rocket while we are shooting the movie.” So I didn’t really know what that was going to entail. We figured it out on the fly. We started rehearsals and set out to find a good working process for making that character as realistic as possible the we sort of developed it over the course of the first movie.

Q: How was it growing up with James as a brother?

There’s five brothers and one sister. There’s six of us, and we were all there last night (premiere). With everyone’s spouses and significant others, kids and all that stuff. My parents were there. So it was a Gunn contingency. I am the youngest. It was cool. I think that we all entertained each other growing up and I think that’s why we all ended up in creative fields. We liked making things up and telling stories together and doing all of those kinds of things. It was an interesting trip in my family. 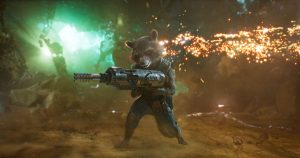 Q: So you are the one who does the movement for Rocket. Rocket is short and you are tall, however the movements seemed flawless. How was that created?

I literally get down on my hands and I’m in a squatted position. Sometimes I am seated or bent over. Sometimes when Rocket is sitting on something I have to get very low like this [crouch down]. I know you are only audio recording this and not filming this. But I frequently will have to do different sorts of this kind of thing if Rocket is sitting. If he is standing on this, I would be about here. I always try to get my eyes where Rocket’s eyes would be. That is my task. 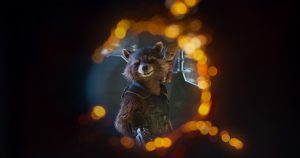 Q: When you finally got to watch see the final product of Rocket, do you see your mannerisms in him?

SG: Yeah, sometimes, and my face. I know when Rocket looks around, or shrugs or winking or all that stuff. That’s all stuff I did on set. It takes a team of people to make Rocket. I’m there basically so the other actors have an actor to work with and not a blank space. And then I am also there so the VFX team has a reference to go by when they are animating the character. But there is so much of my brother that is in there, the special effects team does a huge part to create Rocket and then obviously Bradley (Cooper, voice for Rocket) comes in and flushes out the character and does the voice. Which I think he is great. It just takes a team.

Q: What inspired you to act?

SG: I predict my memory. I wanted to be an actor from the time I was old enough to know what a professional was. I don’t know why. I think that when I was younger I liked it more because I was from a big family and I liked attention and it was something about performing that when everyone was looking at me I liked it. But as I got older and I learned more about the craft of acting I found that being an actor brings me close to people. Having to look at the world through the lens of another person, no matter who that person is, it causes me to be more compassionate and try to understand people better. That’s why I like it now. But I love my job more than ever. 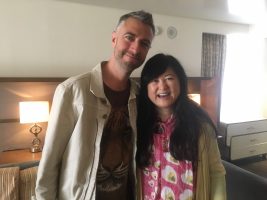 Q: I saw your name on the cast list for the new Avengers film, Avengers: Infinity War.  Can you say anything about?

All I can tell you is that the work that I do that goes into assisting the creation of Rocket that I do for Guardians of the Galaxy, I am also doing that now for Avengers. That’s literally all I can say. What I do for Rocket on Guardians I am doing for Rocket on Avengers. And that’s literally all I can tell you. My character is Kraglin (for Guardians), I can’t comment anything on that as far as Avengers goes.

Q: Today (April 20th), I checked imdb.com and according to that, Kraglin is on the list.

IMDB is incorrect. There has been no announcement or anything about having to do with any of that. I don’t know why that would be in there. Maybe people just think that because they know that I am doing it. So they guessed that? But I can tell you I am doing Rocket. That’s what I have been doing.