EXCLUSIVE: “Shot Caller” star, Omari Hardwick on determination, being a Dad, and what made him a wolf. 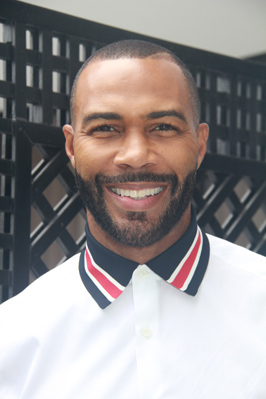 Omari Hardwick just might be one of the most relentless guys in the business. A career that seemed destined for the NFL was cut short by a knee injury while playing with the San Diego (now Los Angeles) Chargers and he was even homeless before his acting career took off. We chat with Hardwick on what got him through those tough times, fatherhood, and what it was like working with his co-star, Nikolaj Coster-Waldau in their new movie, Shot Caller. 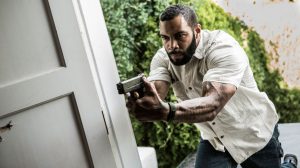 Q: Did you make a backstory of your character for the film?

The fact that he is a parole officer is definitive. It’s black and white. He is a parole officer. You imagine that he is a guy who has dealt with the most hardened criminals to the soft guy who comes to jail who really probably shouldn’t be with the bad hardened criminals, like Jacob, Nikolaj’s character. Ed Kutcher, my character, who I made a wolf. I always make a character an animal and I made him a wolf. I thought he was a hunter, I did the beard really big, I gained fifteen pounds. So, I was even bigger in that film. I wanted to physically be at a place that I thought mentally this guy, even if not having to use his physicality, he would have wanted to mentally feel a level of strength and protection because he is dealing with this level of criminality and these inmates that he deals with. Ric Roman Waugh, my director, the films obviously incredible director, said he is definitely suffering from PTSD prior to as you saw in the film, him getting hit. That level of PTSD increases after he’s been hit, but he is already dealing with PTSD. Like a lot of paramedics, doctors, firefighters, there are those of us in life who have lost family members at a very early age or to murder or violent crimes. A lot of us walk around not diagnosed with post dramatic stress disorder and many of us have it. So, Ric told me from the gate you can make him a wolf, you can make him whatever you want to make him but just know that he is brittle, he is broken, he is hurting. He doesn’t have a family at home, he is probably OCD, everything is orderly. So, I did that in terms of making him OCD. 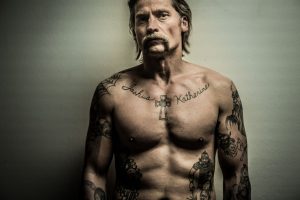 Q: Your co-star, Nikolaj seems to be friendly and funny guy. Did you guys joke around?

He is a great guy. He is a funny guy. We both are ironically on competing shows. Obviously, my show, Power and his show (Game of Thrones) is its own level of power so we both are on these big, big shows. Of course, he is a jokester, funny dude. I got incredible pictures I would have to go back and get. Playing jokes on each other and doing all kinds of crazy stuff late at night. In a scene, that was the final scene of the movie, where we have to come and take down this bad group that he is a part of. I learned a lot about his life, his view on America versus where he grew up. He invited me and my family to Denmark, we’re going this Christmas. Really an interesting. We are super respectful of each other, really honor each other’s journey. Family man, guys guy. He and Jon Bernthal (played Frank ‘Shotgun’), and Benjamin Bratt (played Sanchez), Matt Gerald (played Phil Cole), and Juan Pablo Raba (played Herman Gomez), these guys all got very close to me. But working directly with Nikolaj was cool, good guy. 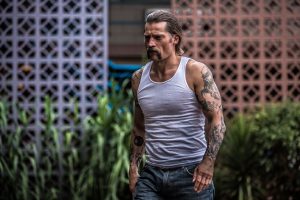 Q: So will you study Danish?

We’re thinking about having our kids raised there for about two years and actually learn. So, he is inviting us to go. I don’t think there are as many black Americans that there. But it’s definitely increasing. I don’t know if there are many Asian Americans there or Asian decent or Indian. I don’t really know what’s the breakdown of Denmark in that way. I would imagine that it’s pretty white. But the openness, it’s always been known as very open and I can’t wait to be a part of that. 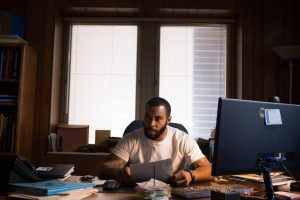 Q: Let’s talk about your journey a little bit, I read your bio and understand you lived in a car?

Probably in a car for about three months. There were certain couches I was able to be on and there were friends. It was just easier for me. I lived in a car two separate times. One time was prior to working, prior to getting any work and then one time was after working. But now that I was working, things didn’t take off the same and I couldn’t go back to a regular job. So, I found myself not in an apartment anymore, didn’t have any money for that. I kind of went through that a little bit twice. Then finally things took off. I would shower at the Hollywood YMCA. I definitely called home one time and thought about quitting. I definitely called home to my parents and said I don’t know about this. But I think I always heard the voice inside of me going you’re supposed to do this. Even if not just as an actor, even to also use your platform to give back in the communities. You get a bigger platform. I could hear both voices. There was a desire that God definitely wanted me to use, not only what I ended up becoming in life as a known big actor so that young people would listen to me and take advice from me and I could reach back into the community, but also I heard him say you have a lot of great stories to tell. You’re somebody that’s supposed to make it. I could hear it. I could always hear him say you got to be here. I knew it.

Q: What advice do you have to the young struggling actors living in their car right now?

I always was one that was real big on really, really work on your craft. That’s the forgotten thing for the generation you are talking about. They want it overnight, they don’t want to intern for anybody, they don’t want to carry coffee. Just learn your craft and become so good at it that it becomes undeniable when you do get the one shot. Because everybody will get it. You’ll make it to the room at some point. Some audition will happen and you’ll have a shot if you’re talented. If you have some talent. But if you work on that craft on top of your talent and getting better and better and don’t worry necessarily about…as a woman it’s really difficult. She can’t go be in the car the same way a boy can. It’s not as safe and it’s probably not as safe to be in a car now a day as it was when I was in the car. This is a more dangerous world every ten years. It’s becoming more dangerous. There’s more hate out. It’s almost like president Trump makes it where you see the hate coming out. It’s not necessarily a great moment to live in a car. It’s dangerous. I would say to focus less on that part of Omari’s story. I would say to a young person is focus on the fact that I was never giving up. The real lesson is I wasn’t giving up. As long as you go “I ain’t going nowhere.” Or from whatever city I come from, if I come from another country or if I come from this part of California versus the middle of California, where ever I am from. I’m not going to go anywhere until I get this thing happening. And then one day maybe I’ll go and raise a family in another place. Which is what Omari is now doing. I got out of here. I just visit. I do meetings here. I live in New York and I live in another city. I think that’s the advice I would give to young people is just craft. Just always work on your craft. From everything. Omari should I martial arts? Why not? Omari should I play the piano? Why not? Should I play the guitar? Learn everything. Because you are just that much more of a force to be reckoned with when you get an opportunity if you kind of got all that stuff up your sleeve.

Q: Do you have any memorable auditions?

I have definitely experienced an audition where I scared the people in the audition room one time because I picked up a chair. I was doing whatever I was doing and I felt like this was something that the person would have done and you got to admit they have seen one hundred and fifty people today. How are you going to make yourself stand out? So, I picked up a chair and I kind of went at one of the…I kind of thrusted at one of the people with it. Not swung at it and certain people don’t take to that and then other audition rooms completely love it. They want to be scared, they go, scare me. That’s exactly what I want. I actually got the job. But I was told in getting the job that half the room was not wanting that because it scared the shit out them. I was a little embarrassed about it. I’ve tripped on a cord walking into a room. I tripped accidentally, almost fallen on my face, like tripped on a cord. Cause you are sleepy, you’re tired. You got all of these odd jobs to make ends meet and auditions at ten in the morning and you’ve been awake till five AM working at a club, you get tired.

Q: What are you into right now? Are you checking bucket list?

I got an album that is coming out. I got music that is coming out. I am a poet, but this year it’s music. Last year I did an album, there’s a little bit of singing on it and a little rapping on it, a little bit of folk on it. Collaborative efforts from great singers and MC’s who are doing hip hop. It’s very musical and so it’s a trilogy, it’s “Later Decatur”. Which is where I grew up Decatur (City in Georgia). It’s the name of the album, it’s part one, two, and three.

Q: You have two kids?

Yes. Nova is four and Brave is two.

Q: How are you balancing work with family life?

Thank God their mother and is as strong and secure as she is because I’m gone so much. I take them everywhere. They have been on about four hundred flights between the two of them. I took them to Monaco. Then we went to Italy after my mom did Europe for the first time. So, she went to Italy this year for the first time. We went from the work in Monaco and France to the vacation in Italy. They are priority for me, so I try to juggle as much. I don’t sleep a lot. I sleep about five hours. Some days I get six or seven, but I live on five hours. I was in the studio last night till two AM. The pick up this morning was eight am. So, I probably went to bed about three thirty or four. I am talking to you on four hours of sleep.

Q: How are fathers established now?

Q: Biggest lesson you have learned as a father?