“Valerian and The City of a Thousand Planets” star, Cara Delevingne shares her most difficult task of becoming an action star – battling the baguettes 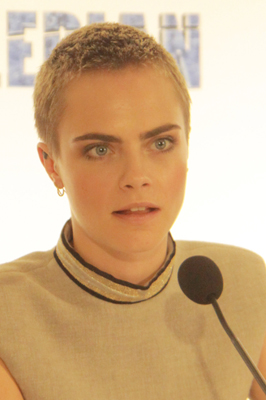 Cara Delevingne has spent the last couple of years transitioning from runways to the big screen, and in her new film, Valerian and The City of a Thousand Planets, she adds action star to her resume. While some of the physical training was much more demanding she was already familiar with some of the sacrifices of caloric splurges, like that oh-so-tempting French food in Paris. 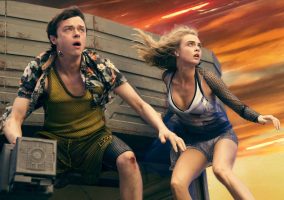 Q: Can you talk about the intensity of the stunt work you had to do?

I really love doing stunts. Anything that I get to learn during a movie whether it’s sword work, or not using guns. In any way where it’s learning a new skill or trying it. I’m kind of the first one to be like sure, kind of dive in head first to it. It was so important to really feel like we (Valerian. played by Dane DeHaan and Laureline played by Cara) were two people that could potentially save the world or save the universe. In the physical sense just doing everything we possibly could to do the best job.

Everyone who we worked with, the stunt coordinators, everyone was so incredible. I really would have done it forever, it’s so much fun. Then Luc (Luc Besson, director & writer) would sit on his table eating his beautiful French baguette with the most amazing bread and the best cheese. And me and Dane would be sitting there trying. Filming in Paris is an incredible opportunity but also the food was so good. When you have to only eat a piece of fish with the vegetables. That was probably the biggest challenge was saying no to the food.

Q: Anything fun that happen behind the scenes that you can share? Also, what would you say you learned from one another?

I’ll start with what I learned. I can’t even begin to start actually from what I learned. I think me and Dane working together, I thought it was always very interesting why Luc picked us both. I think it’s funny because over the six months we definitely have a different approach. Dane is an incredible actor and went to drama school. I’ve never learned more on a film watching him work, his dedication and his work ethic it really inspired me so much. Sitting on set, we got to talk so much about how we do things.

For me, I reminded Dane on how to laugh and keep it fun and light. Also because we were so lucky on set, we got to have five day weeks. We did not get to do night shoots. We got to have a lot of spare time where we kind of got to explore the movie, the characters, but also Paris as well which was so nice. I’m trying to think of one funny moment. I think maybe when we fell out the trash shoot. You get to see in the movie the various little different things, but the amount of odd stuff that was put in that trash shoot, the different slimy parts or random things. Kind of getting to dive into that. Honestly the detail of the sets that were made were so incredible I never wanted to leave and just discovering the different kind of moments was really special.

Q: Some of the scenes that stood out was the Rihanna’s scene. What is your thoughts for visual effects?

The visual effects are so incredibly mouthwatering overwhelming. Kind of when you strip those back it’s a lot simpler to understand when you are using the boxes and using the things that they used. When you narrow it down, it’s the visual effects that make you dethatch. You’re like, who’s in what part again? That makes you escape, which is why it’s so incredible I think.

Q: You have had a successful modeling career working with some of the best designers in the fashion world. How did you find the time to fit doing movies into your already high demand workload? Also, when selecting roles, is it ever in your thought process how you will be perceived by young girls since many see you as a role model for young women?

I’ve been given a tremendous opportunity. I’m very blessed to have a strong influence with young girls and teenagers. That’s been my goal from when I was younger was to be a role model and for young girls to be able to look up to me because I am following every single one my dreams that I’ve ever had in my life through hard work and determination. My message is that you can do anything you put your mind to as long as you work hard and never give up. For me acting is basically what I spend most of my time doing. We just spent six months going this and Suicide Squad was again another six months. The occasional time that I do get off I do like to do other work, in times either modeling or charity, also a break which is also important. Acting has always been my dream and my passion and I’m going to carry on following it.

Valerian and The City of a Thousand Planets is currently playing in theatres nationwide. For more info, visit the film’s official website at, http://valerianmovie.com/