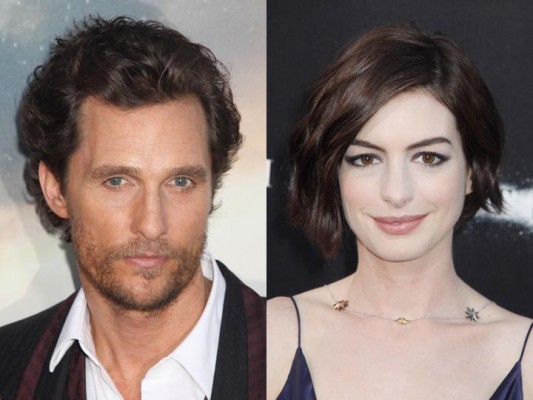 Tackling the subject of traveling to space to find a planet where humans can migrate to, Interstellar is an eye-opening sci-fi film, but also a love story in many ways. Matthew McConaughey and Anne Hathaway play astronauts who wear spacesuits — but we found they have different thoughts about the suits and the challenges that came with that costume. Also, what is their view on space? Did real-life fatherhood affect Matthew’s acting? 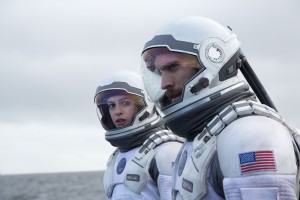 Q: How challenging was it to act while wearing a spacesuit? Did it help or hinder emotions with the helmet on?

Matthew: The suit was only about 40 pounds.

Matthew: I think a real space suit is closer to 100. They did a lot of work at making it as light as possible and making it easy to maneuver in. You couldn’t break into a sprint. No. You couldn’t jump as high. No. Once you have the suit on, a lot of it as far as what you could express, yes, was from the neck up and sometimes through the mask. For me, it was part of the story that made sense. It was physically more challenging in Iceland in a space suit on a glacier — with the elements, absolutely. Couple of helicopters, 100 mile per hour winds. 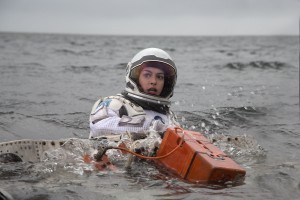 Anne: On a good day, I didn’t think it hindered it. The first time I put it on, I made up my mind that it was my favorite costume that I’ve ever worn. Thanks to this man on the right (director Christopher Nolan), I’ve gotten to wear some pretty spectacular ones. But, this one, it was the closest I’ve ever felt to feeling like a kid at Halloween, if you could stretch out Halloween for several months. I love that feeling. Forty pounds is a lot for me, so it helped that I had to make up my mind that I loved it because that was the only way forward. 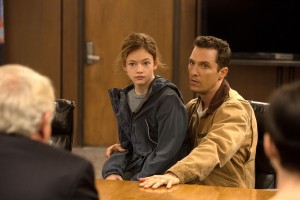 Q: For Matthew, as a father of a daughter and as someone who has to go off and film movies, how did that affect your acting?

Matthew: Let me say this because I’m in a fortunate position because my family gets to come with me. It’s something I’ve thought about because Cooper’s chasing a dream that was taken from him. He’s sitting there on a farm and a dream is re-introduced to him and the question of: If I did have to go off and leave the family for a few months, that’s a much more minor situation than we have with Cooper and Interstellar. Let me bring it back to family for a minute. If you take a snapshot of this panel, we’ve got some serious Nolan lineage up here and they’re all experts in their part of what we’re doing as writers and producers. And Chris has a daughter. It was apparent to me early on that this is about family and about parents and children. That’s obviously where the aorta of the movie sits. Even if you’re not parents, you have parents and you’ve been in situations where there is a certain kind of goodbye — nothing as extreme as this. I think that’s what everyone lynches into. That’s the common denominator that runs through this that everyone can understand. 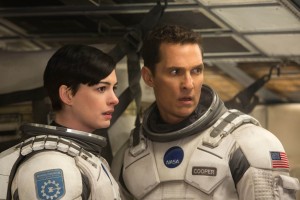 Q: What do you think about space and space exploration?

Matthew: On my end, it was something that I didn’t think about in the vernacular as we evolve as the new frontier, and if it is, why? I didn’t consider it all that much. One of the things that I got from this film is mankind’s expectations have to be greater than ourselves. And as Chris said earlier, the further out there we go, the more we find out that it’s about you and me — right here. So, it’s much more of an attainable thought. I am in no way an expert on it. I can have conversations about it now that I couldn’t have done before getting in on this film. But, it’s now a much more four dimensional outlook as far as where we’re going and which way to look where that new frontier is.

Anne: One of my first experiences with the Space Program was with the memorial that was built for the Challenger. When I was in seventh grade, my class spent the entire school year preparing to launch a spaceship, all together, and we all had our different jobs that we all had to learn how to do, and we learned the math that you needed. We learned practical skills that you needed. And I thought that was really cool. I think that if you can take a tragedy and find the gold in it and turn it into something positive, that’s great. And I’m hoping that the suspension of the Space Program is just that, a suspension, and that it’s not the final say in the matter, because I think we need it.