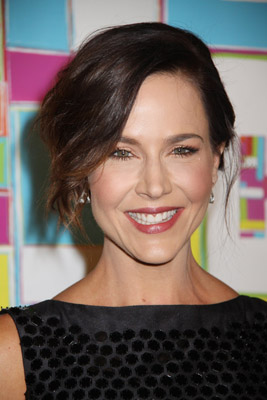 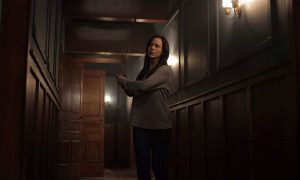 Tranquility does not seem to be working out so well for actress, Julie Benz. Before she took over as  Mayor, Amanda Rosewater in the SYFY series, Demise, we  saw her on the hit series Dexter, in a bubble bath that ended in her grizzly demise. In her new film, Havenhurst, Benz plays Jackie, a woman who is on a path to a more peaceful life starting with staying clean and sober. The problem is, the building she is staying in has more evil spirits than the ones she was ingesting.

We chat with the talented actress who does troubled characters like nobody’s business.

What was the spookiest place you ever lived in or stayed?

I stayed in a castle in Scotland one time where Mary Queen of Scotts had stayed with her third husband and she had to escape through a window or something. I remember in the castle, they told us there were ghosts and I didn’t really believe in ghosts at the time. Then, that night, it was really windy out. You could hear the wind whistling and the windows were really tiny. My water glass that I had on my side of the bed, the next morning was on the other side of the bed and no one had moved it. I was really freaked out.

They also locked us in the castle at night. It’s a hotel, a small hotel, but they locked all the guests in their rooms at night and they leave. We’re locked in. [Laughs] So it doesn’t feel too safe when you’re locked in and you can’t get out like, “we’re stuck in here”.

What did you do to decompress and come back to reality after playing such intense scenes as Jackie?

Yeah, I found that Jackie carries a lot of pain and I tried to reveal that in my physical movements, especially in the beginning. Her shoulders are a little more slumped, they’re down. Everything is very down. Ironically, I had to do a lot of Pilates, [laughs] just trying to get back to normal. I am a big advocate (for) Pilates; I do Pilates on a regular basis. Just stretching out, my muscles and limbs feel normal. Every night I come home and do some Pilates just to get my posture back. Usually in the car ride home is where I decompress, you know? LA traffic, there’s plenty of time to [laughs] sit in the car and listen to some music and get back to who you are. Then turn around and get back into it the next day. I use the car as my decompressor, and my (compressor) when I drive back to work.

What was it like working with Fionnula Flanagan (plays Eleanor)?

This is the second time I got to work with her. The first was on “Defiance” where she plays my mentor in “Defiance” season one. I love Fionnula; she is elegant and is a stunningly gorgeous woman. She has this amazing presence on and off camera that makes you want to sit up a little straighter and be your best around her. There’s a scene in the movie where I have to take her on emotionally. I’m leaving and she left me shaking. She’s like a wall, you go up against her and she’s an unmovable force.

You started acting young, did you give Belle any tips, and how did that go?

She’s pretty savvy. She knows her way around the set. You have to be (aware) of the fact that she is young and there are certain elements that were scary to her. We were doing one stunt that really frightened her and she was expressing her fear, and they weren’t listening to her. So I pulled her aside and we talked about it. Then we made it so she wouldn’t be scared.

It’s those elements that you have to be sensitive towards; the fact that I always treat young actors as colleagues (is) because they are colleagues. They have to have a certain level of knowledge to even just get the job and they know what they’re doing. At the same time you have to respect that they’re young and can get more frightened and more scared by things, so you have to be sensitive to that. I mean it’s a scary movie to be in. There were moments that I was truly terrified in.

I had to make sure that she was emotionally okay and ask, “Is this too scary for you? Do we need to rearrange this so it’s not so terrifying for you?” Don’t get me wrong, she’s a tough little girl, she’s tough [laughs]. I don’t know if I could have done what she did at that age. 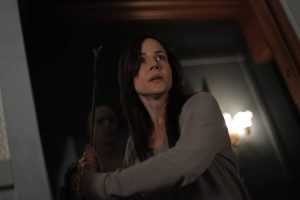 How did the movie start from your end?

I was sent a script and I was out of town at the time, so I ended up doing a Skype meeting. It was my first and only Skype meeting with a director of my audition. So I Skyped with Andrew and we talked a lot about the script. I really wanted the movie really bad. I love the characters; I love how the script was… I found out later that originally Andrew developed this as a TV series. It was a really well thought out script and all the characters had a purpose and a reason. There were no rewrites on the script as we were shooting. We shot the script as written because you could tell a lot of work had gone into developing the history of the characters and the history of the building. Everything had been very well thought-out for many years.

I love the drama element to the horror aspect. It’s not just a horror film, it operates on a deeper level in that Jackie has the heroin (addiction) but at the same time, does she survive in the end? I liked that twist as well and I loved the whole historical aspect of the script dealing with horror. I was a big fan of “Devil in The White City”. I like that tie-in the movie has. 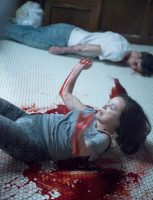 Between this film, “Dexter”, and your other projects, you spend a lot of time with serial killers. What do you think is so fascinating about serial killers?

Well, they exist in real life [laughs]. I think you’re always wondering if the person next to you is a potential serial killer. I don’t know after all these years. I think what was interesting about Rita (Julie’s character) on “Dexter” was that had (Rita) ever found out about Dexter being a serial killer, I do believe she never would have acknowledged that it was real. I don’t think she would’ve believed it herself because when you create a life with someone and you’re in love with someone, then find out they’re a serial killer, what does that say about you?

What did you miss? We see those stories all the time in the news like, it turns out that your neighbor has three girls kidnapped in the basement and you’re like, “He seemed like such a great guy. I had no idea”. We see that play out all the time in life. I think there’s a whole fascination with that, “What would I do if I was in that situation and discover that the person I was sharing my life with was a serial killer”? Then you question your own moral code, morality.

If I found out I was married to Dexter (played by Michael C. Hall) and he was a serial killer killing other serial killers, how would I feel? I don’t know. I’d probably report him because it’s the right thing to do, but he was getting rid of the bad guys. Killing is still killing, it puts you in this (hamster wheel) and it’s spinning around and around. (You) never find the right answer exactly (except) how you respond [laughs]. Then it’s like, “If I do report him, am I going to end up dead?” It’s a horrible thing. That’s what’s great about entertainment because it would make you really question how you would react in situations that hopefully you’re never faced with in your life. 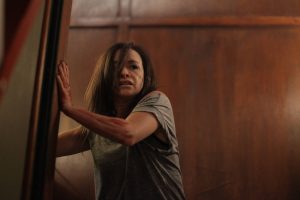 The scenes are very physical; did you get any bumps or bruises while making this film?

I didn’t have any… I don’t bang up that easy; [laughs] knock on wood. I don’t get injured that much. I think it’s because I’ve been an athlete my whole life. I’m pretty physical. I will say that one of the scariest things I had to do was when I was being chased and the floor dropped out underneath me, then I dropped. That scene, I had a very specific mark I had to land on to pull the floor out from underneath me and I had to drop a pretty (long) distance into a pad. It was a trapdoor basically, and I was terrified.

When I was a little kid I fell through a trapdoor in a barn and got hurt pretty bad. I think it just brought all that back to me. Also, just knowing I had to do this whole scene and land on a specific mark without looking, I mean you can’t look to see where you have to land right? I couldn’t look down to actually see the mark. I had to do the whole scene; my heart was pounding so hard that I was terrified the sound department could hear my heartbeat [laughs] pounding. I was shaking, literally shaking anticipating the floor being ripped out from underneath me.

I felt like I blacked out, I was there, and then all of a sudden I was on the ground on the pad. I don’t remember the moment where the floor dropped out and I was falling. I had to do it a couple times because if I wasn’t perfectly straight on the mark I could hit my face and knock my teeth out and I was terrified. That terrified me. We had an amazing stunt double who we threw around. She was fantastic; she made me look really good.

Havenhurst is currently in available for online streaming