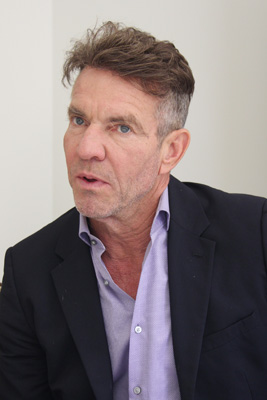 Texas native and Hollywood veteran actor, Dennis Quaid has been in the game a long time and has played some memorable characters including biographical characters like Jim Morris in The Rookie and Jerry Lee Lewis in Great Balls of Fire. He takes on that challenge again and this one seems like his most challenging yet playing Arthur Millard on a journey of redemption in the new faith based film, I Can Only Imagine. Dennis shares his experience of the film and for all of you ladies wondering, yes this Hollywood heart throb still has a smile that will take your breath away.

Q: What’s the magic that drew you into this project?

I did Soul Surfer which was another faith based film if you want to call it that. And the real Bethany Hamilton was of course on the set. And her brother was working on the crew. And we became friends. Then afterwards he sent me this, I guess Andy (Andrew Erwin, co-director) and Jon (Erwin, co-director) contacted him as a way in. And sent me the script. And the CD. So I put the CD aside, check out the script to see if we’re going to do it. I was so profoundly moved by this story, and how raw it was. I mean it’s kind of scary truthful in a way. Very brave on Bart’s (Millard) part to even tell this story. And so that’s why. Because I sat down and read the script. When I read a script, I am an audience member with the first time experience of it. That’s the way I feel. That’s the way we want to do it. 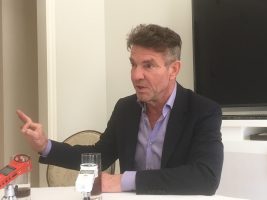 Q: In the film, your character said “Dream doesn’t pay the bills.” So when you first moved to Hollywood, did you doubt your dream would pay the bills?

Well, when I was going to the University of Houston and had to get an apartment there. And a couple of us really wanted to go out. Most people were there to, I guess they were dabbling, I don’t know what their…All I knew, what my own motivation is, that I was given a gift by Mr. Pickett who taught acting at the University. That’s what I wanted to do with my life. So to know that when you’re eighteen, nineteen, it’s a real gift. And I was fascinated by what makes people tick. And I was there for two and half years, and I was gonna go out to LA. And I didn’t take any other courses. I was just in the theater department really. 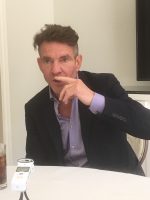 And I was there for Mr. Pickett really. And a few fellow students, not my parents, but a few fellow students especially, they were like, “Well, why don’t you take like business courses, so you have something to fall back on.” And I was like, “Fall back to what?” I just don’t know. I was going to do it. And I guess you have to have that otherwise the first time, or second time, or tenth time, or 30th time somebody says no, you’re gonna go okay I give up. That’s what I wanted to do, and I was gonna do it. And I had my doubts. I come out here, and not doubts, I have my feelings of the pressure. Like why aren’t things going fast enough. Cause it was like, “That wasn’t fair,” or this or that. But I wanted to be a working actor. I wanted to be doing movies. That’s what I wanted to do. Then you got to be lucky too [Laughs] And you got to make your own luck. By getting out there and doing it. But it’s like God will give you a path to something, your heart’s desire. He will give you a path to your heart’s desire. That’s what he wants you to have. Your heart’s desire. But you go down that path. And things are going to get harder. A lot harder before they get easier. Usually, I mean there’s some lucky ones out there. Just seems to fall into it. But that’s usually the way. Or eventually about something in your life that you need. It’ll be a path. But if you really follow the path that God gave you to get to that place where you want to be. There’s trial, trial in it.

Q: How did you prepare for the role of Arthur (Millard, Bart Millard’s father), and is there anything you can identify with him in your own words?

I’m certainly not the kind of dad Arthur was. And it was talking to Bart, when I got to the set. Got down there, I sat Bart down, and had him tell me out of his own mouth the story. It was a great gateway of getting to his father in a way that, just a way, just watching Bart not even keep the words, or the story about it. Just like feeling Bart as he told that story. And then, in just the doing of it. J. Michael (Finley, actor) was such a great actor. Very vulnerable to work with, very great talent. And new to the scene, and great singer in his own right. And Andy and Jon were molding the story. We were all in there making something out of nothing. Everyday, really. Because it doesn’t matter whats on the page. You get in there and you have to play these, have to do these really difficult. You don’t want to go there really. Who wants to go there. But we did. And so we got it. But there was always for me, in the doing of it, there has to be a tiny bit of distance. Because there’s distance when somebody is abusing somebody like that. They’re separated from what is really going on too because if they really were aware of what they were doing. That they’re unaware to begin with. So in between takes, I just like drop it like a hot potato. And go out to my trailer, watch whatever on the satellite TV. Just whatever. Just drop it and then go back to it. Cause it’s a difficult thing to do. But what we were going for was the truth. Bart was there on the set. Watching. And we wanted to make it real for him more than anything.

Yeah, well it’s an amazing arc of a human being, let alone a character. But most abusive parents, were abused kids by relatives or by something. And there’s just no excuse for abuse. And he was bitter about his own supposed dashed hopes and dreams. How real they may have been or not, I don’t know. But he was bitter. And he made Bart feel bad about himself. Physically abuse him, verbally abuse him, and emotionally abuse him every single day of his life. And when you do that to a kid, it effects the way they think about themselves, who they are and their worth as a person. And to themselves. And that went on well into Bart being a young man. To the point where he just had to leave home. His mom wasn’t there either, and he just had to get out. And he struggled and something Bart was kinda dying to carry around, and his father, unbeknownst to Bart, got a diagnose with this death sentence kind of cancer. It may have been going on before all this happening, and I believe way down somewhere in there, when Arthur did think about it. But it forced him to really look at himself and his life. And he wanted to have a relationship with Bart. And Bart wouldn’t have it at all. Wouldn’t buy it. And he had a spiritual awakening because of this which is not necessarily, doesn’t feel very good too. Beginning, it’s tumultuous drain down come really force. Prayer forces us to really look at our true selves. because that’s who you’re talking to, your true self through God. And he found he had a spiritual awakening through Christianity and through Jesus and he wanted to make amends, ask for forgiveness which wasn’t going to happen. But it slowly got worked on him, got worked on Bart. And he came around with increments at a time. It’s the way it happened. Big deal. But he, Bart forgave him, and Arthur had to forgive himself. Which is really hard, to forgive ourselves about things if you get down to it. People can tell you, “Hey, it’s alright. Solve it. Not only is it embarrassing but it’s about the way you feel about yourself and what you’re capable of sometimes. And they had the most loving close relationship at the end of Arthur’s life. And that gift that Arthur gave Bart at the end. That Bart did not have to spend the rest of his life feeling that way about himself. Because it, not only that, “He died and now I gotta carry this around for the rest of my life.” And it’s a beautiful thing. And then this song comes along I can only imagine that he wrote about his dad. You know what I am saying, can’t make that up. It always caused the pop charts to be a huge selling song. And I think the reason it was is because everyone of the people who hear the song and hear the words, they take it personally into their own lives for one reason or another. I think it hits in a place where we don’t have words. There’s a yearning there. 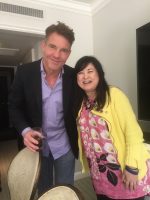 Q: You’ve played the role of a father several times on screen, are a father off screen as well as having a father.  Do you feel your  onscreen experiences affects your real life?

I learn something from every part I do. I take away something, I don’t know if I can put it into words sometimes. And I think movies are made to make us feel things. Not necessarily to put into words. They hit us in place that we don’t have words for. In a way they kind of point the way at that. And it’s universal in any human being, the way that hits. So yeah, I guess it changed me. But I’m not quite sure how. But I’m glad to be here today [laughs]. Talking to you about it.

Q: What do you have next? What are you working on or what’s coming up?

Actually, I got my Nordic sailors haircut. And I’m going to be shooting at the North Pole in about another week. 200 miles from the North Pole. It’s a series for Amazon called Fortitude. Yea it’s a really great series. It’s his third year. My second on it. North Pole. It has 1000 people and 3000 polar bears.

I Can Only Imagine  is currently showing in theatres nationwide. For more info visit the film’s official website at, https://icanonlyimagine.com/