“Tomb Raider” star, Alicia Vikander is no longer dancing around the idea of being a heroine 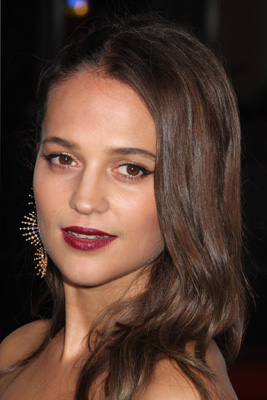 As if the women of 2018 weren’t already kicking enough butt, here comes another female ass-kicker to join the action heroine squad, Alicia Vikander as Lara Croft in the new Tomb Raider.

The one time dancer turned actress has shown her inner strength onscreen in films like The Danish Girl and The Light Between Oceans, but this time around fans get to see this young Hollywood beauty continue to flex her acting skills and her biceps.

Q: The film is a coming of age story as well as adventure. How do you feel about that?

Yeah, it is a coming of age story. That was our inspiration, because this film is now based a lot more on the 2013 rebooted game, and there she is, a normal girl in the beginning. I found it really interesting. I think we’ve seen it a lot in these kind of big both super hero and action movies. If you have the origin story, then that’s a way for us to get to know our character, to feel for them, to relate to them on a more human level. I thought it was wonderful that I could play a young woman who’s still trying to find her footing in the world and also has a story with her dad that has been lost for seven years, but she hasn’t really been able to mourn him either, because she never knew what happened.

It’s a story where she goes out in the world and all the kind of traits and skills that she has within her is forced to be pulled out, due to the adventure that she goes on and the challenges that she’s put through. I’m happy that you saw that in the end, because I had that long span and I wanted to have every single step of the way being portrayed from the beginning till the end, for her to become in the end the action hero that we so well know her to be.

It’s also very empowering when you get to be there in the end, because I think if you have all the struggles and you feel for her being this real girl, that makes you be with her emotionally, then you root for her even more. So in the end, when she’s holding on that cliff and managed to get out of that tomb, you hopefully celebrate with her and look up to her.

Q: What do you think of Lara Croft in terms of where she starts from internally and emotionally. How much of her history has been affected by the absence of her father? 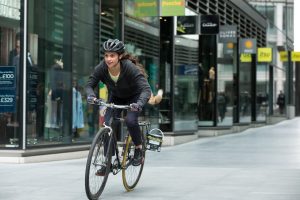 That’s her life, but in any film you need to narrow down and decide what story within that life you’re telling, and we wanted to find an emotional way into feel with her. I think one of them is the relationship with her father. We kind of know this character, too. She has the love for history and mythology and artifacts and all of that, but I thought it was an interesting thing, like a lot of young people do, you have your dad telling you stories when you were a kid, but because of the pain that he just took off, she never really knew what happened. Maybe he just abandoned her. She kind of has closed that door. It’s not until she finds a secret chamber and she also realizes he was not only a suit in the cooperate company, there’s actually a reason for why I have a lot of these things, and that’s his discovery and also an acceptance of who she is, and that is something that I think any young person can relate to, and also the fact that she has a lot of people who tell her what to do, or ask her, “What are you going to do with your life?” Is this good enough? I think that’s a pressure that I never had when I was 20.

Q: Your role seems incredibly physical, can you share what your training consisted of to prepare.

I started about four months before we started to shoot. What I loved was when I met with both Roar (Uthaug, director) and Graham (King, producer), the producers, we wanted the action sequence to be such a big part of this film to set in the reality, would you buy that this young girl can beat this bigger, stronger man? We then story-wise integrated that she’s a physical being, and she trains MMA and she’s a bicycle courier, so I wanted her to be a strong girl for it to be plausible that she could do what she does later on in the film.

Q: Were there any injuries?

I’m actually covering up. You can see. I still have little wounds on my legs, but no real injuries. You have an incredible stunt team that makes sure everything goes safe.

Q: Was there something that you thought was particularly daunting that you were like, “I don’t know if I’m going to be able to get there, or to pull this off” and if so, how did you push through that?

There’s so many different answers to that, because physically it was something completely different. I had never taken on a character and a role in a film like this. I’ve always I think come from a world, I was a dancer before and for me to try and pretend that I can do an MMA fight or go up in ring that was really daunting to do that in front of people. I was almost like, “Just don’t look. Can everyone just turn away? And I’m gonna try in front of camera but no one’s eyes are on me?” That was scary. But then I think, we worked so hard and we met up in the mornings and we worked on script and I think a daunting thing is to make these big studio films, these big adventures which I loved since I was a kid. I mean it was truly like, when I walked on the set, Walton (Goggins, played Mathias) and I were jumping when we walked around the sets. 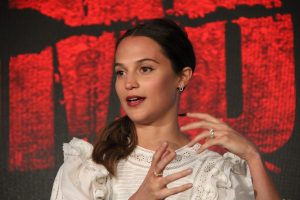 But the thing is, I’ve realized I’ve done a lot of art house films, and to make a film like this and the films that I look up to in this kind of genre, is when you’re able to mix these big spectacles with heart and find something that is grounded, and make an artful, interesting story commercial and big and loud as it should be. That I think was the biggest challenge, and I realized very early on that it was also something about giving it a lot of energy and force throughout the shoot. 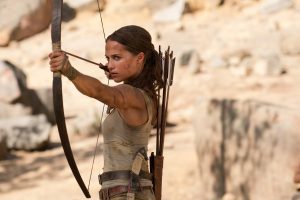 Q: This is very different than the original Tomb Raider with Angelina Jolie, what are your thoughts on the original? Also, being a gamer, did you play the Tomb Raider game back then or since you became Lara Croft?

I was probably around nine and ten years old when I walked into the room, and I was at a friend’s house. I sadly didn’t have a PlayStation at my house. I hadn’t seen a girl, a female antagonist computer game and I was so curious. I actually remember, I stood behind and I asked those older boys if I was allowed to play and they didn’t let me so I had to wait until it was just me in that room sneaking down and I did play it then, but then I was more into computer games, so I played actually the anniversary version of the first game around my mid-teens.

Then yes, I’ve seen the film. Angelina Jolie made her into an icon and still, that is one of the first times we got to see a female action hero on screen too. Then, this character has been away for about 22 years. It’s interesting. I was at Crystal Dynamics (video game developer of Tomb Raider series), I went to San Francisco, the game company yesterday. It was so cool. I got to see all these different versions of Lara that has kind of been throughout history now. What I realized was is the fact that it’s truly the essence of her, the kind of girl, woman that has inspired a lot of young girls and boys around the world for so many years, but it’s more that she’s morphed into a personality or a different version of her persona of herself due to what time she’s in. 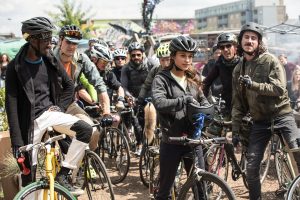 I think that’s interesting in terms of what times we are now. This is the kind of girl that you would relate to in 2018. I think if you would go out on the street and meet guys and girls, young ages and ask them what they would find cool and attractive, it’s a very different answer that you would get now than in the mid-90s.

Q: How did this film initially come on to your radar and did the filmmakers come after you for the part or did you go after them? 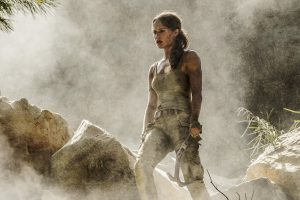 I had a call through my agents saying that they had reached out and we set up a meeting with me and Roar and that’s how it all began. I was curious because I think I had said to my agents immediately on the phone, I was like, “What?” That saying, me still being a person who played this game growing up, but I think mostly it was actually because I was like, “Well it’s been done.” it was not until they told me that it was in regard to the 2013 rebooted game and I had seen, I haven’t played that much video games for the last 15 years, but I had read about it online and I went in and did my research and realized, “Ah, this is actually a very, very different take on this character and the story and that made me suddenly feel like … .that happens when I read something. Then my imagine starts spinning and I was like, “Yeah, sure. I would love to meet Roar.” Then we felt like we met and had the same idea of what you could maybe possibly do with this film.

Q: Are you now living at Portugal? Why Portugal?

Yes. My husband introduced me to that place three and a half years ago. He’s also a big surfer and then Brexit happened too, and I want to be in Europe. I love that place.

For more info visit the film’s official website at, http://www.tombraidermovie.com/