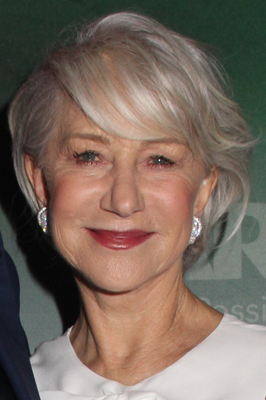 I really love Helen Mirren, and it’s not just because she is a phenomenal actress; it’s because while many established talents today give publicist navigated replies and are even sometimes a bit jaded during press events.  Helen walks into a press event she gives you 100 percent, organic Helen Mirren. Her joy and passion for what she does is apparent and is contagious.

Q: What is the joy and the fear in aging?

The joy is the wisdom, if that’s the right word – it’s not really the right word – that comes with getting older. Let’s say the understandings that come with it and the letting go of things that seem to be so terribly important when you’re 16,17,18 … 21, 22. Then as you get older, you let go of a lot of things. I would say that’s the joy, definitely. The fear obviously is the fear of becoming incapacitated. The fear of what happens to Donald’s (Sutherland, who played Mirren’s husband, John) character. On the other hand, also it’s a challenge. It’s a challenge of courage. The knowledge is that from the moment you’re born, to get old is in your destiny. It’s in your destiny. There are certain cultures that understand this much better than we do. I would say the Japanese culture probably does. 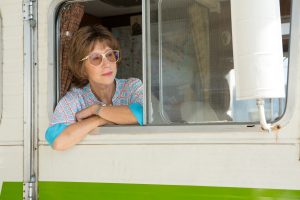 Q: Have you ever taken a road trip?

Yes, I have. I took a road trip with my husband quite a few years ago. We went across the south, from Natchez to Charleston and it was a wonderful trip, really wonderful. We didn’t actually sleep in the van. We stayed in little bed and breakfast places. But we drove, and it was a great, great trip. Also, early in my career when I came to do theater, it was sort of a road trip. We were playing in San Francisco and our next date was in Detroit and we had four days in between. I decided to take a train from San Francisco to Detroit and that was an amazing journey. That was a fantastic journey, to understand what those Western pioneers walked across. It was mind blowing. It gave me a view into the American character that I would never have had, otherwise. 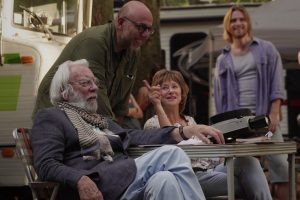 I don’t know. I can’t really remember. It’s interesting when you have to make a relationship that has to be profound and believable with an actor that you don’t really know. I didn’t know Donald. I’d worked with him 20-odd years ago, but even in that 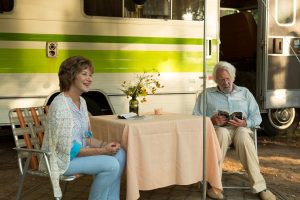 movie we didn’t have a lot of scenes together. He was a big star and it’s, “Donald Sutherland.” You turn up on set the week before you start rehearsal, and in one week you have to try and make a relationship between you that looks as if it’s lasted for 50 years. You have to somehow create the intimacy and the ease. As actors, you have ways of doing that. We have a facility in us to create that. I think we helped each other in that. I was very lucky that it was Donald that I was dealing with, because Donald is extremely sensitive and emotional and he’s not a closed off person. He’s not like this. If he’s upset you know it, if he’s happy you know it. He’s wonderfully exposed, for want of a better word. It became so much easier then to make this relationship that the audience have to believe is real on the screen. 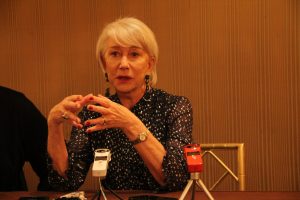 Q: Have you ever given thought to directing a film?

Q: How did you find the core of Ella, having this multi-dimensional personality and feelings about her husband and all mixed up in this character?

Honestly, it was the script. It was the story of the script. I think whether that sensibility came from Stephen (Amidon, screenwriter), I’m sure it came from a combination of Paolo and Stephen, because Paolo’s vision, look at life is always three dimensional. It’s never simplistic. It’s finding comedy in tragedy. It’s finding nobility in ignominy, it’s finding hatred and love can actually survive together. That’s the nature of Paolo’s work, which was really my number one reason for wanting to do the film, was watching Paolo’s work. I have to say if you see those elements in the character, honestly it comes from the vision of Paolo and Stephen our writer, I would say. Then me, just trying to do it as best I could, really.