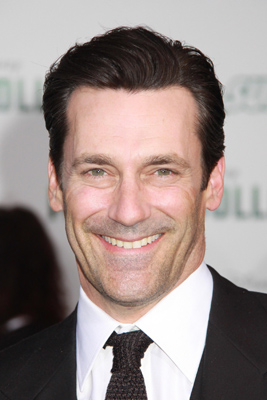 If  Don Draper was to watch Jon Hamm in the new film Baby Driver he’d tell fans to shut the door, have a seat, and crank up the volume because you are in for one hell of a ride.  Hamm stars as Buddy, a guy with an infatuation for heroin, hold ups, and his hot girlfriend, played by Eiza Gonzalez. The film is action packed and timed so well to a memorable soundtrack that the next music video you watch on MTV will feel like a replay of your sixth grade talent show.

We chat with Hamm on his new role, trading in his neck tie for a neck tattoo and why he has a crazy love for acting. 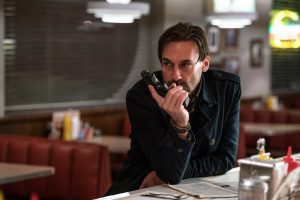 It takes a village. It’s a team approach, you know? Courtney Hoffman, our costume designer, is fantastic. She came up with this with Edgar. It was a collaboration, in a very real sense, of having this palate that was very primary colors. The first time you see Jamie, he’s red. Whatever that does, it hits your brain in a way where you go, “That’s dangerous.” That King of Hearts like sweater. You’re like, “Holy moly!” That’s a red flag. Literally. Buddy (Hamm’s character) is all in blue; that’s a different message. Darling (Eiza Gonzalez’s character) is all pink, very pastel things. And Baby (Ansel Elgort’s character) and Deborah (Lilly James’ character) are black and white. So, you have these bright colors, vivid colors on one side of the equation, operating against these neutral tones. That’s an example of how a costume design can really affect the narrative. That’s when you know everybody is getting a chance to do (his or her) job. Bill Pope’s cinematography in this is phenomenal. Our set designers had these beautiful kind of … they all got the memo, which was “Let’s make these pictures breathe.” 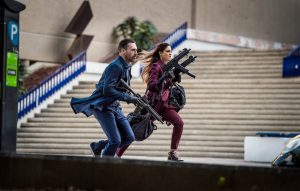 Q: What did you love most about the characters you portray in the movie?

You get the chance to play a crazy person. You don’t (in real life) get a chance to run around and shoot guns and get chased by cops and drive sideways on an active freeway. Look, if I could do that in real life, I would. But, like Jamie was saying, I’m a man that does believe in consequences. That’s what makes me drive the speed limit and go home at night. That’s what that’s all about. That’s the dream. That’s why you get into this business—you get to run around and play pretend. That’s the best. If you wanted to just punch a clock, there are plenty of other jobs you can do. But to get a chance to run around with a stupid fuckin’ haircut and cool clothes and a (carry) a big ol’ gun and (drive) a nice car… 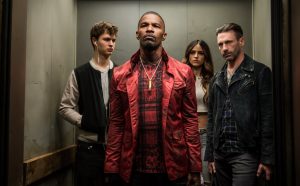 Q: How was it working with Jamie Foxx?

It was great. Honestly, Jamie and I knew each other from here and there and everywhere. We’re contemporaries. We hang out in the same places sometimes here and there. Honestly, it was a pleasure. Jamie’s work speaks for itself and he’s been doing it for a long-ass time. I’ve been watching him for a long time. From stand up to In Living Color to fill in the blank, to winning Academy Awards. So, it’s a pleasure to be on the same set. It’s a pleasure to be in the same scene. Yeah, man, there’s nothing like it. It’s like getting to play in the big leagues. That’s what you want to do. 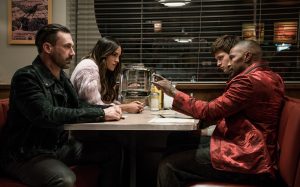 Q: Music is so important to the film, especially in the shootout scene, were you aware of the music that was going to be used in that scene or were you surprised when you heard what was used in the finished film?

It was in the script. It was baked in, literally. Edgar wrote these scenes to those songs. It’s apocryphal at this point but he’s talked about it. We had the earwigs in or, if there was no dialogue, there was playback. So, we’re conscious of all of that. I’d never heard of this before. Because there are so many other things that go into making a movie—you gotta cut if for time, you gotta cut it for the censors, you gotta cut it for this or that, you can’t clear the music. Somebody’s living on an island in Majorca (who says,) “I’ve got the rights and you ain’t getting them.” There’s so many things that you have to go through to make this kind of thing happen that people just don’t do it. The fact that it took Edgar 10 years to make this thing happen was remarkable. So, yeah, we were very aware (of the music). We were choreographed to this (music).  We weren’t going to change this stuff. 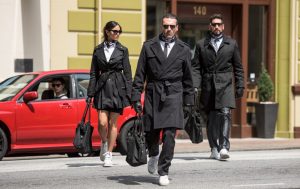 Q: You’ve been reinventing yourself after Mad Men. Why have you chosen these movies you’ve done, playing supporting characters? Your co-star Elisabeth Moss has been in big TV shows and movies. The Square just premiered in Cannes.

Lizzie’s choices are impressive. I haven’t seen (Top of the Lake). I can’t wait to see it. We’re good friends and we talk about these things a lot. She and I have similar guiding principles in choosing projects, which is do something that scares you. Do something that’s weird. Work with people that are better than you because that’s how you get better. You don’t get better hitting balls off a tee. You gotta face big league pitching if you want to get better. That’s kind of what I’ve always looked at, consciously or unconsciously. Edgar’s been a friend since 2009, eight years, and I’ve been a fan of his work since I saw Shaun of the Dead, and so he was on my radar as somebody who inspired me to do better. So, I said, “Let’s work with that guy.”

When Ruben Ostlund made Force Majeure—I’d met him at an Academy Awards party or a Golden Globes thing—I told him, “Your movie’s amazing.” And Lizzie told me she was working with him and I said, “That guy’s amazing. Yes! Yes! Do that! Whatever it is, say yes.” You put yourself in those positions and good things happen. 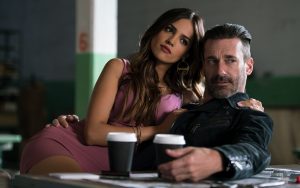 Q: There are two different romantic relationships in this. Ansel and Lily’s is more innocent. Yours and Eiza’s is more twisted. Which one is true love?

What’s the French phrase, amour fou? Crazy love. You can’t help it. It’s not a coincidence that all of the characters being with “B’s” and “D’s”: Buddy and Darling, Baby and Deborah, Bats and Doc. That’s on purpose too. Edgar is that detail-oriented with that kind of stuff. And “Baby Driver.” He makes those themes work.