Manic Trailer is Goosebumpingly Exciting (if you’re into this kind of stuff).

Sex, knives, photographs, and… mannequins? Yeah, they all show up in the creepy trailer for the new thriller, Manic. There is a select company of horror fanatics that appreciate the state of uneasiness. From this eerie trailer the typical nice guy looks to be something a bit more dangerous, and that seems intriguing.

The doe-eyed Elijah Wood plays a role that is beyond perverse, in just the way a horror character should be. The image of someone washing a bloody knife over a soupy pool of faucet water is haunting. Such a nice guy like Wood would not appear to be so maniacal, but I guess that is why this film appears to be so disturbing. Yes, of course, there are the pretty girls getting chased and playing coy while some mysterious character does violent things for reasons unknown. But, the first person perspective camera and echoing screams create a haunting recipe for the exact horror film a horror buff would appreciate.

From the writers of The Hills Have Eyes, get your perversion on when Manic comes out in theaters and on VOD, June 21st 2013. 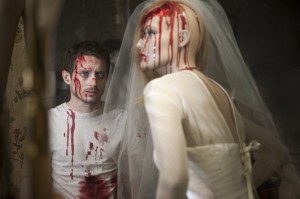