Robert Downey Jr. on being a guiding light and a team player 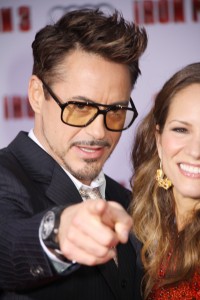 At the very heart of the Iron Man saga, Robert Downey, Jr. stars as billionaire industrialist Tony Stark, putting each of them in positions of great power.  And, as Stan Lee famously pronounced, “With great power comes great responsibility.”  In Downey’s case, the responsibility of keeping the “Iron Man” series grounded.  Co-star Gwyneth Paltrow observes:

Robert Downey, Jr. credits the series’ success to the ensemble spirit of the cast in general.

“I’ve tried to be some sort of guiding light. Every bit as often I would go to set and Gwyneth would be like, “Oh my God, what are we doing? What is this scene again? Shouldn’t Pepper…” and she always points True North.  Jon (Favreau, director of the first two Iron Man films) said from the first time, she’s the heart of the movie. This time, I’d be working with Don, he’d be like, “You know that thing where you say something funny and I say something and then you answer it and we do that?” I go, “Yeah, yeah, yeah.” He goes, “Could we not do that for once?” And I was like, “Oh yeah, yeah, great idea.” So there was a lot of give and take.”

“It does come from Robert. Whatever the concept, whatever the scene, there’s always a quest for sincerity, a quest for the genuine.  Robert will always debate where is the sincerity in the film, in the scene? Where is its heart?”

Some of Iron Man 3’s heart comes from the introduction of a new character, a small boy named Harley Keener, played by Ty Simpkins.  Says Downey:

“Shane Black had this idea, this kind of Capra-esque departure.  His idea of a superhero running into a little kid in the heartland of America I think wound up being a wise choice and kind of a calculated risk. I just liked the idea of this kid getting under my skin. I like the idea of kids bringing their parents to the verge of an anxiety attack and going, ‘Ugh, what’s wrong with you?’ once they push you there.”

Says Downey of his young co-star, “Ty Simpkins is great and I think we’ll be seeing a lot of him.” 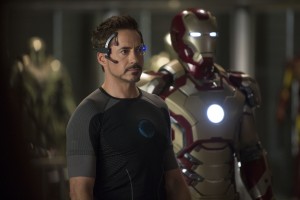