“Selma,” “Barbershop,” and the Common Denominator 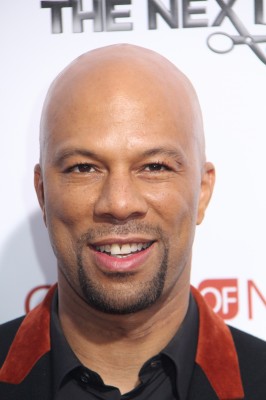 Oscar winner Common, shows his comedic talent in his new film Barbershop: The Next Cut; and while the new installment of the Barbershop franchise is laugh out loud funny, the film centers around serious community issues. In our interview with the Hip Hop artist and actor he shares why his new roles and goals on activism are not….uncommon. 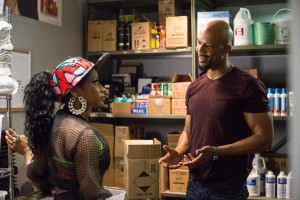 Q: Before The Next Cut, you were in Selma and ironically both films have similar subject matter but one approaches from the comedic side and the other from a dramatic and historical side. That being said, was your original intension as an actor to seek roles that highlight the activist in you or was the experience doing Selma what motivated the activist in you? 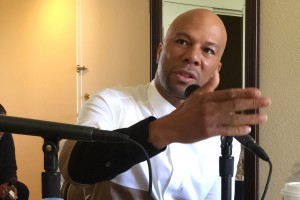 Common: Before this I was always wanting to help the community and help people, and at a certain point in my career I wanted to use my platform to help change the youth and people. Selma was the first opportunity that I got to do it in film because the subject matter allowed us to talk about things as we did press. It was a movie based on some of the greatest movement makers ever. It sparked me to want to go and do more. It’s funny you brought this up with Selma because this has been the second movie in my career as an actor that I’ve been really able to go out and do community work in accordance with the movie– whether it’s talk about social issues, or talking about the community, to actually going into the community. We went to Chicago and we presented some things to the Urban Prep Academy which is an all black male school that has had a 100% graduation rate. So, we went there and spoke to them. We also did a town hall meeting. For me, Barbershop has been a real joy because I’m from Chicago, and I get to go home and do these things. We get to go around the country and deal with real social issues going on right now and talk about it. So, it’s like you’re right on point with that Selma thing too because first it was Selma and now it’s Barbershop and I feel grateful for that.

Q: You also won an Oscar for Selma; Best Original Song, with John Legend. Where do you keep your statue?

Common: I keep the Oscar in my home in the front room and I’m grateful for it and proud of it. 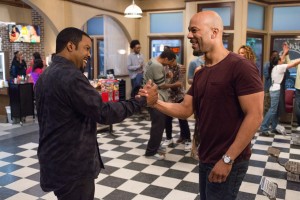 Q: Ice Cube’s character, Calvin is ironically the most serious character in the entire film while still having a comedic side and in real life  he is known to be a leader while still having a fun side.  Both of you originated your careers as Hip Hop recording artists who then transitioned into acting.  What was that like for you personally and professionally?

Common: It really became a natural thing because Ice Cube is a real good dude. He does keep a straight face a lot. He truly does have a leadership quality. He has a good scope on how to make everything good, and he’s willing to give you some support and guidance. I hadn’t been around Cube a lot before this film. So, once I saw he was open to try things and was supportive, I saw our characters were able to bond in certain ways. When we had conflict it worked too. We were able to two men who had the dynamics of what men could be amongst men. And I feel like he’s a great leader in many ways. He would come and say, “Do your thing. We got you here for a reason.” And that type of support you want to get from the guy that’s making the whole thing go. And we were able to get that. So, for me to be honest– one last thing I’ll say– I do my best just to bring as much of the character to life and if someone is in the scene with me, we’re going to be in it together. I’m going to give it my all. And he did that same. I think there’s one scene that Cube has in the film– I think it’s one of his best scenes– where he gets upset about the fact that– and leaves out. He was killing. I remember the energy in the barbershop that day.

Barbershop: The Next Cut is playing in theatres nationwide