“The Expendables 3”: Sylvester versus Mel comparable to “King Kong versus Godzilla” 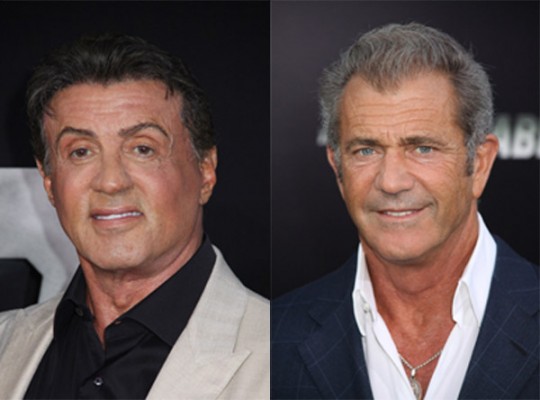 Can you call these guys old? Iconic – definitely, but Sylvester Stallone will argue that age is but a state of mind. The veteran actors billed on the cast list have a median age of a near 58 years. Perhaps experienced is the best way to go.

Anyone who has seen the poster for The Expendables 3 knows it is not suitable for the claustrophobic. The action star power in the film is over the top. But, that is Expendables! We would not expect anything less. The action is bigger, the stars are frequent, and the killing – vicious! Fans of the franchise will not be disappointed with this latest installment introducing a new team of Expendables (Kellan Lutz, Glen Powell, Victor Ortiz, and Ronda Rousey) and a villain big enough to go against the old and new crew, Conrad Stonebanks who is played by Mel Gibson.

Sylvester Stallone and Mel Gibson talk with WhatsUpHollywood.com about going “mano a mano,” 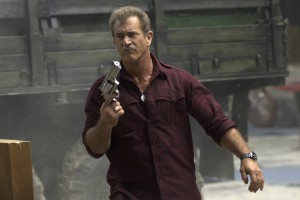 Sly: It was good. There are situations in actual sports where two rivals get together, two people who have actually done very well in their own world and then you say, “I wonder how they would do against each other.” So when that finally happens it becomes an event.

Sly: Exactly, the creature that ate the monster. That’s us. Yes, a contact is made and you do get hurt and it’s freezing there, and in the water you go, “Oh my God, I’m not going to do it again,” but you have to do it again. So I’ve been looking forward to it. And Mel, he’s a great athlete, very fast, very strong, and it was great being punched by him. Thank you very much, I appreciate that.

Mel: There was no actual contact. It’s kind of like movie sex, you don’t actually do it.

Mel: I mean, you’re battling arthritis, but it was fun. It was fun being shot full of holes by Sly.

Sly: That’s right. Does anyone want to ever turn into Swiss cheese? It was rigged.

Q: With respect to the quote in the film, “Age is just a state of mind,” do you agree with this?

Sly: Well, age is a state of “old” mind. It gets to a point where if you get old enough you forget how old you are, and that’s the best thing, is that you walk around, kind of like in a fog. So you really don’t know how old you are until you find yourself watching The Teletubbies drunk one night and you’re like, “I’m really f-ed up.” [Laughs] I’m sorry, but that’s the facts of life.