“The Hateful Eight” is Already Stirring Up Police Contorversy & Director Quentin Tarantino Advises “If you don’t like it, don’t go see it.” 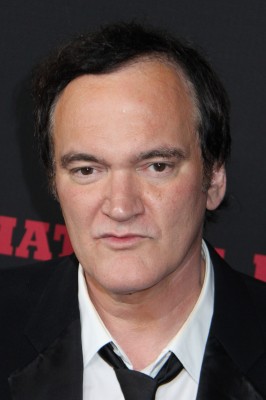 Quentin Tarantino’s new film, The Hateful Eight takes on the sensitive subject of police brutality told in a clever, yet brutally direct way and he is not concerned with any repercussions from law enforcement agencies…at all.  Tarentino held nothing back at the press conference for The Hateful Eight, making the experience a memorable one.

Here is a peak at press conference, and the director is in true Tarentino form. 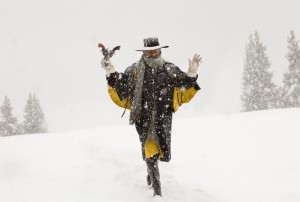 Q: Are you concerned with members of law enforcement boycotting the movie in the cities its shown?  Do you think that it’s those people that should be seeing the movie instead of boycotting?

It is funny because people ask me, “Are you worried?” Well the answer is, no, I am not worried because I actually do not feel that the police force is this sinister black hand organization that goes out and fucks up individuals in a conspiracy kind of way. Having said that, civil servants shouldn’t be issuing threats even rhetorically to private citizens. No I don’t have any idea. The only thing I can imagine that they might be planning to do is picket one of the screenings or something like that. Maybe picket the premier. Maybe picket one of the 70mm screenings or something like that. 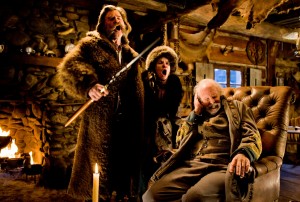 Q: In a sense, you have created your own genre. Your movies are powerful, thought provoking, and often dancing on the edge of being politically incorrect. What are your thoughts on being politically correct in today’s society?

I don’t have much thought on that, other than just like in a conversation like the way you are having it right now. The way you’re asking for it to me right now. I just don’t think about it that way. One can be inclined to just say “F” this political correctness, I don’t have time for that. But in a polite society there is such a thing as sensitivity to some issues. As time has gone on. And there was a time when we weren’t politically correct at all. And we all wince at moments when we look past and we see that. I don’t really know what the answers is as far as that is concerned. However, me as an artist I don’t really think about it at all. It actually is not my job to think about that. Especially in terms of with me as a writer in particularly, but also as a filmmaker, but I am not worried about the filmmaking part, because if I have written it, that’s what I am going to do. But in particularly, as a writer. It is my job to ignore social critics or the response that social critics might have when it comes to the opinions of my characters, the way they talk, or anything that can happen to them. 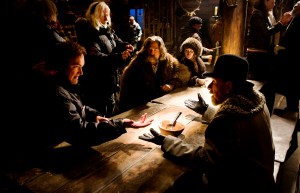 We can talk about the race stuff which we just talked about. I am sure some people here sitting in the room might be uncomfortable about the violence that is handed out to Jennifer’s (Jason Leigh) character (Daisy Domergue). And actually I am playing with that in the course of the movie. When she gets that crack in the head by John Ruth (Kurt Russell’s character) at the beginning of the movie, that is meant to send a shockwave through the audience. You are meant to think, you aren’t necessarily meant to like Domergue, in that moment, but you are meant to think that John Ruth is a brutal bastard at that moment because that does seem like an overreaction to what she did and what she said. Now time goes on and you see how you feel about the characters. But it’s meant to do that. But there is this aspect of the way this story works in general. It is, I have trapped eight people, actually nine people if you include O.B (James Park’s character). He’s not part of the Hateful Eight because he’s not hateful. It’s the Hateful Eight and O.B. [laughs]. But the thing is though, the way the story works, part of the actual tension that we were talking about, the pressure cooker that we’re talking about, and because if you know where I am coming from, you know in that vaguely-esque, peck ‘n’ paw-esque way to some degree or another is anything can happen with these guys. Anything can happen to these characters. 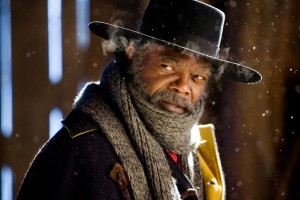 Any piece of outrageous violence could happen to them. And there is, I paint in a system where there aren’t colorbook lines. I can cross those lines. You know, the way graphic novels, I don’t mean graphic novels as in a comic book but the way novels that deal with violence kind of almost seem to go anywhere in a way that movies aren’t allowed to go. So in that scenario, I am going to make it that seven of these characters, anything can happen to them. But when it comes to this eighth character I have to protect her because she’s a woman and they can’t have a destiny that it can happen to any of these other characters. No, that goes against the entire story. I am not going to think like that. And when I think of, basically, an artistic hero in that predecessor when it comes to that I think of somebody like Ken Russell who was raped over the cold by the press in England. Constantly for the boundaries he pushed. And he said um, especially response to the devils or something. Do you let these people get you down? Because I don’t think about them. I can’t think about them. It’s my job not to think about them. Because I believe in what I am 100 percent. And I am doing what I’m doing. If you don’t like it, don’t go see it.