“Whiplash” star Miles Teller jokes about break-up scene in the film: “I dumped my girlfriend right before the press tour for this” 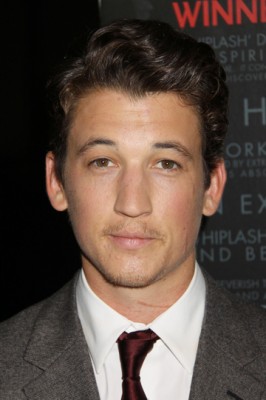 Miles Teller, one of the most talented young actors today, was challenged by the tense drumming drama of Whiplash. His character Andrew has a dream to become a jazz drummer but his teacher, Mr. Fletcher who is played by J.K. Simmons, gives him an extremely hard time. It’s almost bullying but Andrew hangs on for his dream with a strong mind. We don’t see that strength of youth too often in modern society. I really like that spirit. What was Miles’ reaction when he read this scrip? How does he handle pressure? What does he think about Andrew’s choice for his relationship? And he talks about Kate Winslet’s “working with Sean Penn” story, plus his Fantastic Four injury story. 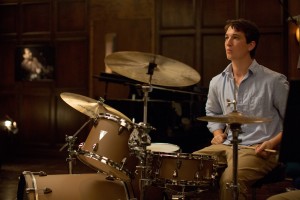 Q: What was your reaction when you read this script?

I was very thankful for this opportunity. I had not read (a script) that demanded so much of a character my age, let alone one that I would get to play the drums in. So I was happy that Damien (Chazelle, director, writer) wrote something like this and did have me in mind for it. It’s got everything in a movie that I would want to be a part of. When I was in college this would have been a movie that I said, “I hope to do.” It’s a movie with integrity. It’s a movie that’s unapologetic. It’s a movie that is kind of pushing the boundaries. And it’s a movie that should leave you really talking about it and creating a discourse and having people excited to explore some of the themes in it. So yeah, this is everything that I could have asked for in a project at this point in my career.

Q: Do you think artists actually want this kind of pressure that Fletcher delivers? 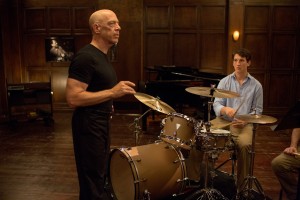 I do think that for me the greatest success that I’ve had on a particular project or in exploring a role does come through collaboration. I wouldn’t want to do a movie where everything I do the director just says, “Good job,” and then I am under-directed. At the same time, I’ve done movies where I felt like I was kind of over-handled and over-directed and I didn’t feel like I was able to do some stuff that I wanted to. So I think it’s a fine line but at the end of the day you do, at least I do, need somebody to kind of see what I’m doing because, especially in film, even though I’m feeling it right here, it’s not playing that way in the camera. So for sure, for me, I do like directors that really will kind of inspire me with ideas and give me something to kind of chew on during the scene and something to get a better performance.

Q: Can you talk about playing the drums in this film? 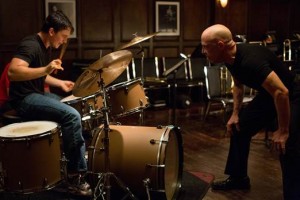 I hope it was sweetened a little bit because at the end of the day Andrew becomes a much better drummer than Miles was, although I have a pretty good skill set with it and it’s something that absolutely through hours of practice I got to a pretty good place with it. I started getting blisters. It’s funny because when I read the script there’s all this talk of, “And the blood splatters on the cymbals,” and all this stuff. I would come onto set sometimes and I would look at the drum kit and there’s all this blood there. And I literally to Damien would be like, “That’s too much. No way. Let’s get that off. It’s too much blood.” And he goes, “No, man. When I was playing, all my drumsticks were covered in blood. This is real. This is truthful.” So yeah, I started getting some bloody blisters and I was bandaging them up and stuff. Just the nature of filming a movie like this in 19 days with very intense drumming sequences, a lot of that sweat is real and that’s great because you don’t have to act when you’re actually kind of playing to exhaustion.

Q: There is the break-up scene where Andrew chooses his dream over his girlfriend. Have you had to deal with that yourself? What do you think of his choice? 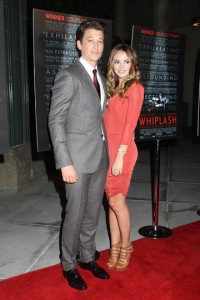 I dumped my girlfriend right before the press tour for this. [Laughs] I just had to trim the fat. I’m just kidding. We’re still together and very happy. I think because you catch them very early on in the relationship, they’ve only dated for a couple months. He sees the drumming as having been a very isolating, independent experience. So until he can find that balance, that is the mystery of life, then he’ll be alone.

I just had the wonderful opportunity to work with Kate Winslet in a small part, but got a couple of weeks with her on set, and she was telling me about how she had done this movie with Jude Law and Sean Penn… She was saying how they were all so nervous for the table read in New Orleans because he was going to do that ‘American actor thing’ where you just show up, and let it go, and f**king magic happens… like “that’s genius!” But “for me and Jude, maybe it’s just a culture thing” but it’s just that they really prepare… kind of over prepare. They have a very strong idea of how they’re going to say the lines, or whatever it is, and she was like, “And then Sean was gonna show up and just f**kin’ wing it,” [laughs] and just sort of be incredible. 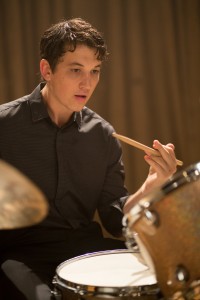 Q: Did you get any blisters from Fantastic Four?

When I was filming Fantastic Four, I took a big chunk out of my finger and had to go to base camp and get nine stitches in and go back to it.