Who was a mentor to Kevin Costner who mentors Jack Ryan? 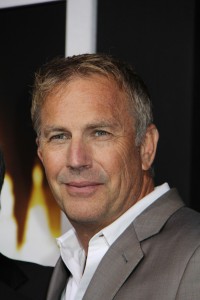 Kevin Costner is the guy who recruits our hero Jack Ryan (played by Chris Pine) in Jack Ryan: Shadow Recruit, and he becomes his mentor. We know Costner as taking the boy scout-type roles for a long time but now he is the mentor and is still running in the field.  We asked what the word “mentor” means to him. 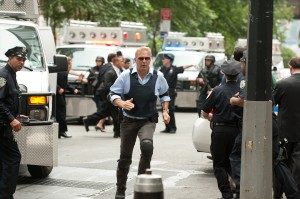 “The mentor role is always that – what can you offer a younger man, what can you offer a younger woman, things in your level of experience. So that by definition is the mentor, if you have a level of experience. But that’s what I was — if you read it on paper, that’s the role that’s meant for me. He inhabited it perfectly, Chris did, his role. And what I liked about it was that I wasn’t just a person at a desk on a phone going, ‘Get the hell out of there. What the hell are you doing? Well, you need to do it faster.’ Kenneth (Branagh, director) was able to say, ‘Wait a second, I want to incorporate some of your skill set into this,’ where even though I’m a stupidvisor, if you would, a supervisor here, that I could take the gloves off, so to speak, and become involved and bring a physical presence and team up with him at the right moment. So I thought that was unusual for the mentor role. Usually they’re back in Washington or they’re in a big, giant control room. In this instance, we were always fairly close together and trying to sort it out a little bit together. And as the movie progresses, you see that he just possesses a lot of intuitive skills, whether it’s being how to survive or to process a lot of information in a very quick way, which I actually ask him a couple times to slow down, remembering that I’m in another century.”

Costner also told us who his mentor was as far as his acting career.

“I’ll tell you, I think exchange, honest exchange, is never out of vogue. This is a business that’s pretty interesting. You get up in the morning, you have breakfast with the people you work with all day, you have lunch with them and you have dinner with them. And the nature of acting, if you think you put three minutes of film in a can a day, that means you’re spending an enormous amount of hours getting to talk about people’s lives, their families. There’s a lot of things that go on on the set, but in terms of mentorship, it was probably Sean (Connery). He was a leading man and he carries himself as a man. I remember a big scene with Robert De Nero and everybody and we were all talking and he finally told me, he goes, ‘Mr. Ness.’ I said, ‘What?’ And he goes, ‘Sit. Sit down.’ (Costner did Connery’s accent.) And I said, ‘Sit down right now?’ And he goes, ‘Yes, it’s gonna be a long day.’ Yeah, and he just talked about, not artsy fartsy stuff, he talked about sometimes just practical shit, like, ‘It’s gonna be a long day. Sit down. And you and I are gonna sit here and we’re gonna watch and when it’s our turn we’ll be ready.’ So, what better advice could one man give another than something so practical that I could use?”